Junior, a hybrid macaque, looks up from inside an enclosure Wednesday, June 30, 2021, at Primates Inc. in Westfield, Wis. Angela Major/WPR

There’s a small animal sanctuary tucked away in a quiet rural area in Marquette County. At Primates Incorporated, you’ll find nine monkeys living in habitats close to their natural environment.

The monkeys residing here were former research animals or pets. More than 68,000 primates are used for biomedical research across the nation, including nearly 9,000 in Wisconsin. Few of those monkeys get a chance to retire. 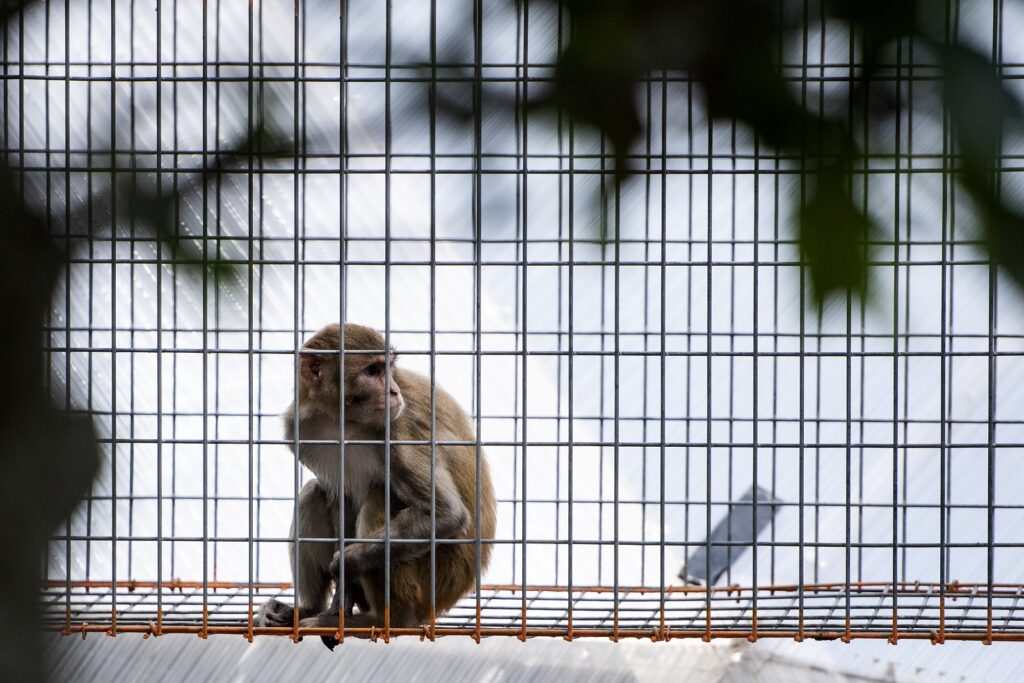 Amy Kerwin is the executive director and founder of Primates Inc. Kerwin used to work with 97 rhesus monkeys in a University of Wisconsin-Madison research lab. She loved caring for them as they were used for biomedical research.

Kerwin has set out to do just that. When an animal is no longer needed for research, it has few options. It costs thousands of dollars to care for one primate’s retirement care.

“It costs just hundreds of dollars to be able to euthanize a monkey to free up their cage. Or sell them to more research, then you actually make money. So the motivation to retire is an ethical compromise,” said Kerwin. 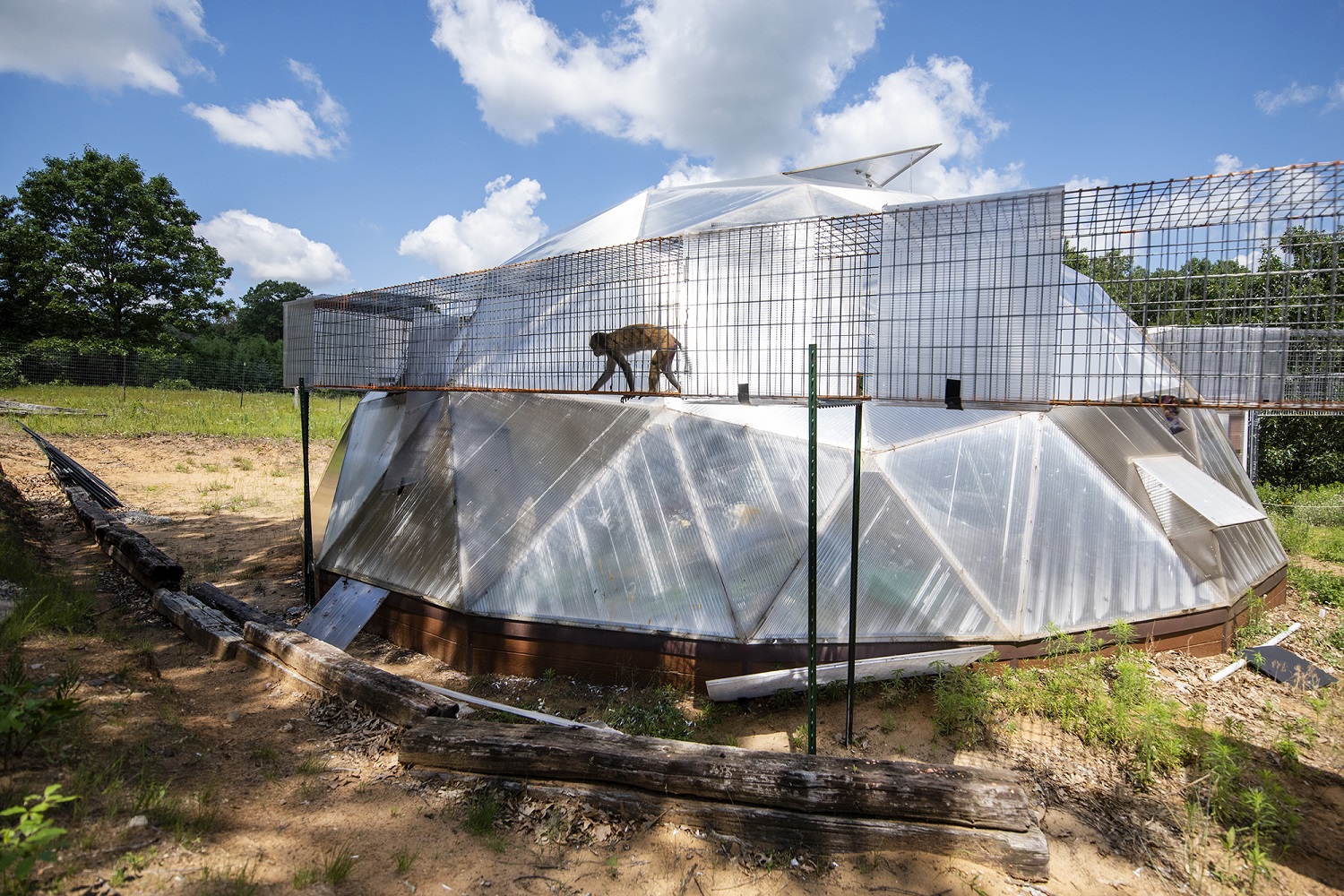 A monkey walks in an enclosed pathway to one of two Geodomes at the facility Wednesday, June 30, 2021, in Westfield, Wis. Angela Major/WPR

After learning about the barriers monkeys faced getting into retirement, Kerwin dedicated her efforts to make a change. She says retiring research monkeys is an appropriate way to say thank you, and give back for their contributions to science. For example, primates were used in the development of COVID-19 vaccines and treatments in 2020.

“They inspired me to do more for the monkeys because I learned some laboratories were retiring monkeys into sanctuaries where our lab was not. And that was one of the things I wanted to see changed,” said Kerwin.

That’s why she started Primates Inc. in 2004. She gathered enough funding and support to break ground on the sanctuary in 2016. The monkeys here will live out their days as close to their wild counterparts as possible.

Fallon Mullen also used to work with monkeys in a research laboratory and is now the Animal Care Manager at Primates Inc. She’s responsible for the day-to-day care of the animals and has gotten to know them quite well, like 16 year-old Mars.

“He is a rhesus macaque male as well, also from the biomedical industry. And he’s paired with Timon, who everyone calls sweet, sweet Timon, because she’s just so, so kind of timid and really, really sweet natured,” said Mullen. 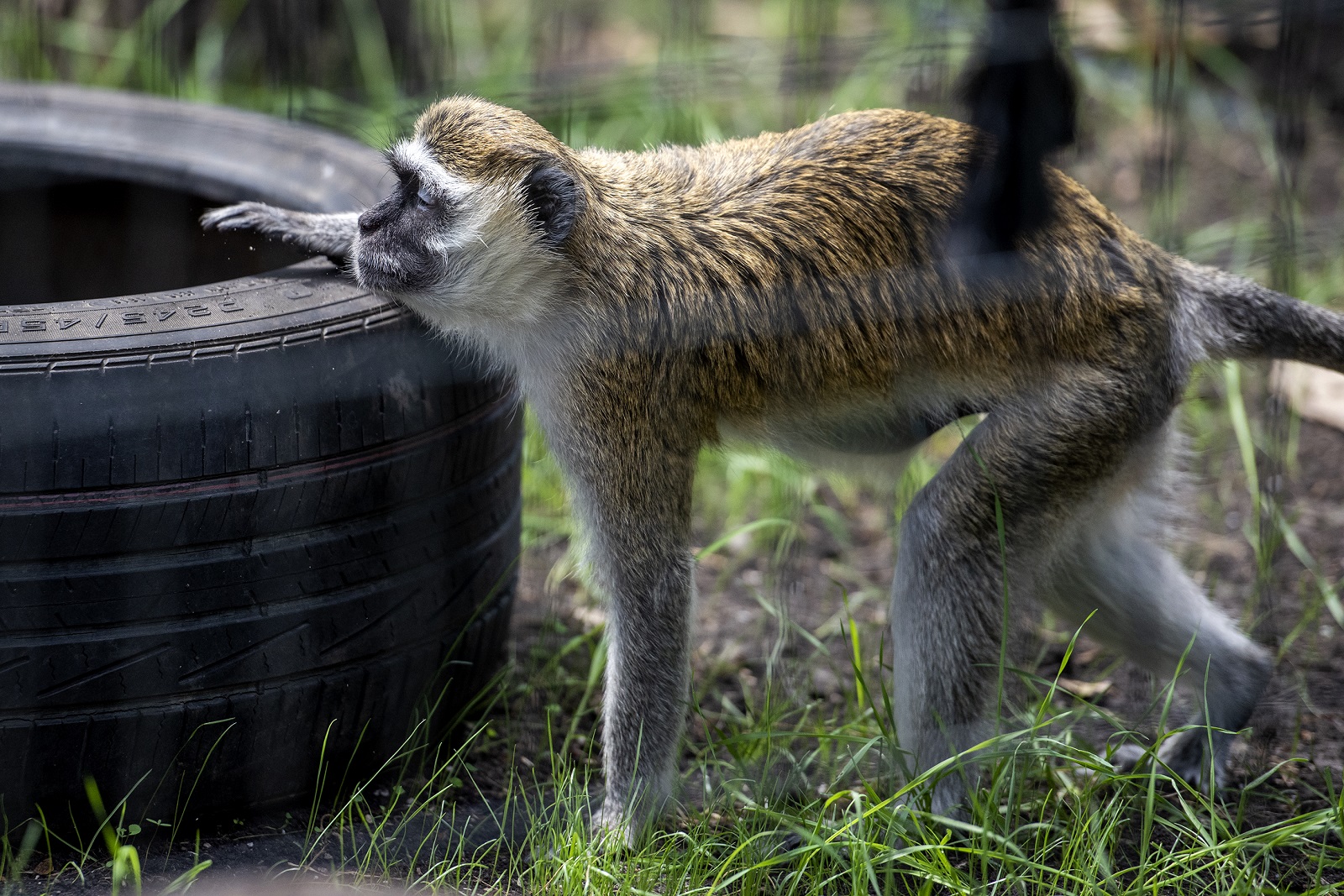 A monkey rests on a tire inside an enclosure Wednesday, June 30, 2021, in Westfield, Wis. Angela Major/WPR

Many of Primates Inc. residents have never lived in their natural habitat. Staff maintain greenhouses, raised walkways and indoor and outdoor spaces for the monkeys.

Primates from research laboratories and the pet trade may be distrustful of humans and act aggressive. The raised walkways are to help the animals feel comfortable and unchallenged.

“They like to be up versus down, especially in that dominance formation. So if you want to get them to do something, it’s probably above your head is where they’re going to do it,” said Kerwin.

“We have never seen a monkey actually swim. They’ll sit in the pool. The pools are either like kiddy pools or like a turtle sandbox…so not real deep,” said Mullen. “The monkeys in the past have just sat in them, waded in them. They’ll bring blankets out, get the blankets cold and wet, put those on their head to cool off. That’s all adorable and just awesome to see because a lot of these monkeys have never had access to water play like that.” 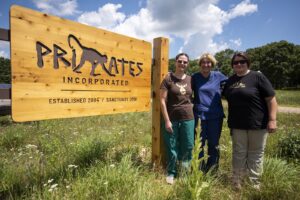 Mullens said that changed when a pair of surrendered pets showed up: Noah, a rhesus macaque male, and Maddie.

“We just gave them their pool this month and he can be seen actually swimming. He goes under the water and does several circles and will come up for air,” Mullen said. “It’s just so amazing to see because he didn’t learn this from the other monkeys here. This was just like his natural instinct coming out. (It’s) also such a great story about why monkeys should have the opportunity for retirement.”

Claudia Cooper worked in imaging radiology in California for 40 years. She moved to Madison upon retirement and spends her Wednesdays helping out at the sanctuary.

“There’s so much to do, always things to do, but mostly what I do is clean and then fix their produce and things like that. And then watch them. I like to spend at least 10 minutes a day just to observe and watch them because it’s just so inspiring and thrilling for me to watch how funny they are and just to watch them for a few minutes and appreciate them,” said Cooper. 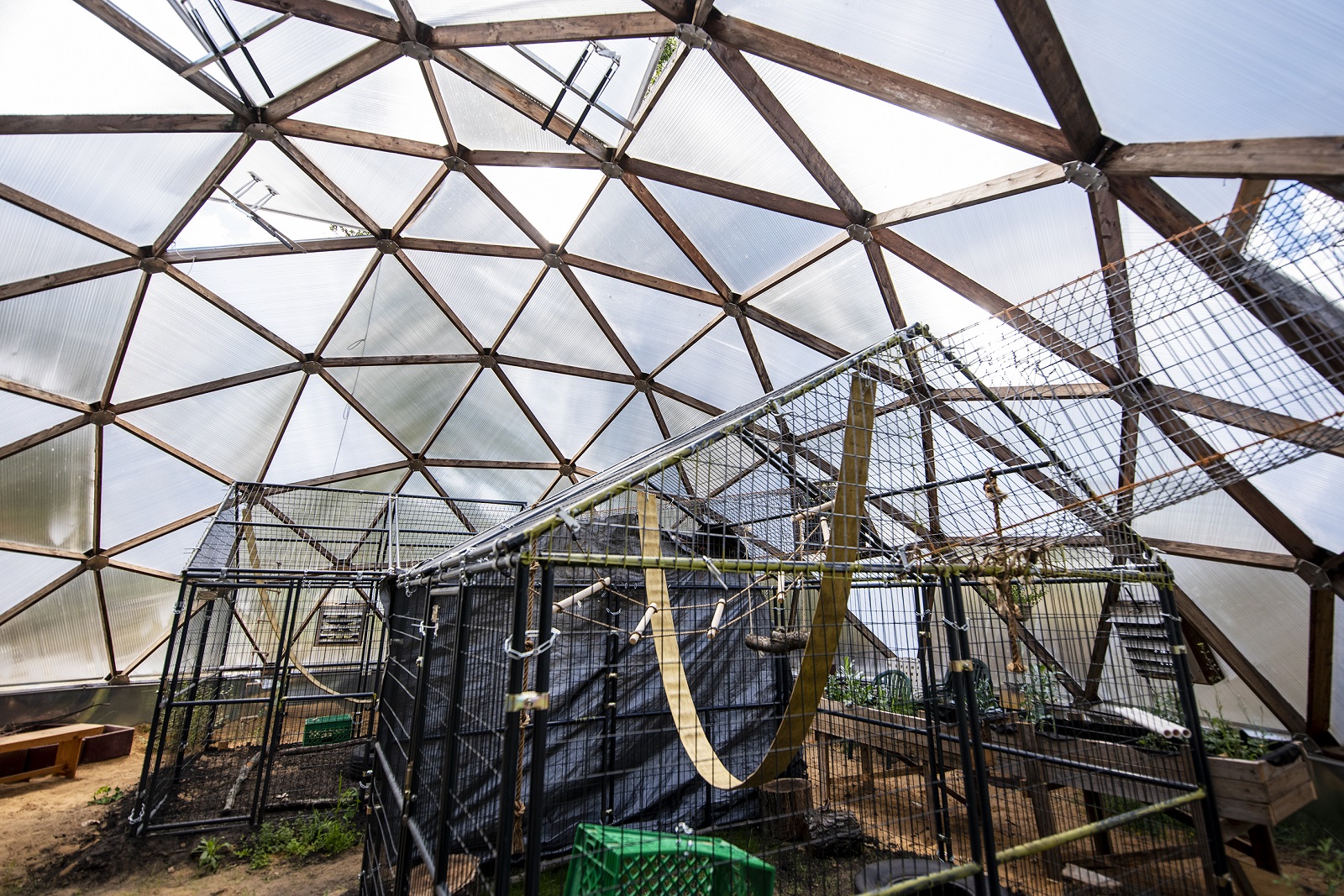 Monkeys at Primates Inc. can travel in and out of Geodomes through enclosed passageways. Angela Major/WPR

Kerwin also offers guidance to others who’d like to help retire monkeys. She hopes Primates Inc. can serve as a prototype for other caring communities.

Kerwin sees the impact retirement in a natural environment can have on the animals. Especially those that have come from labs.

“They are not as aggressive here and reactionary. And I think that’s because of the more space, enrichment and socialization and less intervention we would perform,” said Kerwin.

The staff at Primates Inc. hope to house 100 monkeys one day, allowing even more former test subjects to retire in a natural environment. 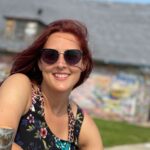 Jana Rose Schleis is a M.A. student at the University of Missouri School of Journalism. Previously, Jana Rose worked at Wisconsin Public Radio for five years as a Production Assistant, Producer of “The Morning Show,” and finally Network Producer for The Ideas Network. She’s from a small Wisconsin town located...