There’s something kind of magical about watching the Olympics — the competition, the diversity, the sportsmanship and camaraderie. Four years ago, a boy from Sun Prairie, Wisconsin, fell in love with curling. And recently, a knock on his door has him even more excited for the Games in Beijing.

Jaxton Ernst was five years old when he discovered curling during the 2018 Winter Olympics.

“Well, when I was younger, we were watching the Olympics. I didn’t want to turn on any other Olympic thing rather than curling,” remembered Jaxton, now a 9-year-old. “And I kept watching it. I kept replaying it over and over and over again.”

“Yeah, Jaxton’s been a hockey player since he was very little, but he was really intrigued by another sport on the ice like that,” said Erik.

Erik, the Promotion Manager for PBS Wisconsin, recently posted a story on Twitter about Jaxton’s curling obsession during the 2018 Olympics. It caught the attention of McFarland, Wisconsin’s Matt Hamilton. Hamilton won a gold medal with Team USA in the men’s curling competition that year.

“They (the Ernst family) went to Kohl’s or something, and he used whatever money he got for Christmas or his birthday or something to buy a cleaning set so he could get a broom,” Hamilton explained. “I was like, ‘That’s awesome! That’s amazing!’ Any broom will do, apparently!”

“Yeah, I used the ball and I basically just rolled it, and then I got my broom and I kind of just sweeped,” said Jaxton.

“And he did,” agreed Erik. “He spent the rest of the Olympics every time curling was on just sweeping around the house.”

When Hamilton saw Jaxton’s story on Twitter, he decided to reach out.

“Matt shared it with his followers and then he sent us a message and said, ‘Can you share your address? I’d love to send Jaxton a gift,'” said Erik. “And so I did. I didn’t think anything of it.”

“And then I found out he’s just in Sun Prairie,” Hamilton said. “So I was like, I’ve got the time. I’ll just put on a KN95 mask and I’ll go visit him and drop it off.”

When Hamilton arrived, it was a total surprise. Jaxton’s dad had to do a double take.

“There’s Matt Hamilton standing on our front porch. I quickly raced to the door and I said, ‘Matt, oh my gosh!'” Erik explained.

Erik told Hamilton that Jaxton was out in the backyard on his ice rink.

“He said, ‘He has a rink in the backyard?’ He was super excited about that,” remembered Erik.

“I was like, ‘Perfect! I’m pretty comfortable on an ice rink, so let’s go,'” added Hamilton.

Wow. Jaxton has his own ice rink in the backyard!

“So how THAT started is my dad had hockey friends and like they were all saying how they built ice rinks,” explained Jaxton. “And he was like, ‘OK, I’ll give it a whirl.'” 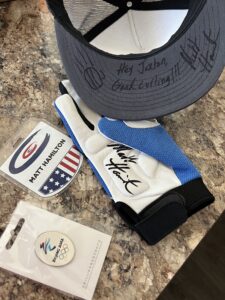 The McFarland Olympian was impressed.

“I wish I had something like that as a kid,” admitted Hamilton. “I grew up on a hill, so I had a prime sledding location. All the kids came to my house to go sledding, but never had a hockey rink.”

With Olympic Gold Medalist Matt Hamilton standing right there in front of him, Jaxton was initially a little star-struck. Then he took a look inside the gift bag Hamilton brought for him.

“And then I’m so shocked because I look in the bag and there’s all this stuff that he used for the trials,” said Jaxton.

The gift bag contained several items, including an autographed hat.

“One of my old Team Shuster hats that I literally washed all the sweat stains off of to give to him. It was literally game-used, probably an entire season worn,” joked Hamilton. 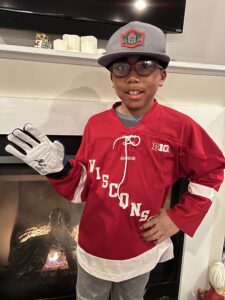 Jaxton Ernst with his official Curling glove and hat, both autographed by Olympian Matt Hamilton. (Courtesy of Erik Ernst)

“And he brought his official curling glove that he signed, that he used in trials also,” Jaxton continued. “And he got a pin and a bag tag. On the front, it says USA. But on the back it says Matt Hamilton.”

Hamilton and Jaxton really enjoyed meeting each other on the backyard rink.

“He was really excited,” said Hamilton. “Yeah, pumped to show me some hockey moves that he was doing. So it was fun.”

“I can teach him how to be a hockey player and he can teach me how to play curling,” suggested Jaxton.

Hamilton is one of nearly 20 Wisconsin athletes headed to Beijing for the Winter Olympics, including fellow curlers John Shuster, Nina Roth, and Matt’s sister, Becca Hamilton.

As competition begins, Jaxton will be rooting for his new friend, Matt. Hamilton said that’s a big motivation for him.

“Just being a good role model for kids like Jaxton and a good representative for Wisconsin is super important for me,” said Hamilton.