Milwaukee journalist Tea Krulos spent over a year meeting individuals who have made it their life’s passion to hunt down evidence of entities that they believe exist, but that others might shrug off as nothing more than myths, fairytales, or overactive imaginations.

Krulos became interested in the paranormal as a kid, checking out books on the subject from the library. As he got older, he grew more skeptical but he never lost his casual interest in the subject.

That interest led to his involvement in the Paranormal Investigators of Milwaukee, a group that tries to find answers to the unexplained. Krulos began attending hunts for ghosts, learning the etiquette and the science behind paranormal investigation. 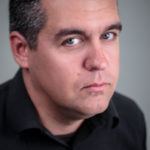 Tea Krulos is a journalist based in Milwaukee. His books include Heroes in the Night and Monster Hunters.