Sonia Vasquez paints a portrait at the Rahr-West Art Museum as part of the "Portrait of Manitowoc" community art project. (Megan Hart/WPR)

It’s give and take when Sonia Vasquez starts a painting.

The Manitowoc native creates rich portraits in the classical tradition. She usually starts with a photograph.

“Then what I do is kind of lay down a layer of paint, and then I sort of take some of that paint off to reveal some of the lighter spots,” she said.

She’s creating 10 paintings for an exhibit called “Portrait of Manitowoc” at the Rahr-West Art Museum. The museum approached her about collaborating, and together they designed a show that combines two things more often found apart.

“I wanted to try to find a way to marry those two ideas of classical portraiture and community art because you just don’t see that very often,” Vasquez said.

She chose subjects from all different backgrounds to reflect the diversity of the local community. The portraits are small, but each one still takes about six hours. Vasquez painted some of them live at the museum. One of her subjects is 29-year-old Natasha Khan. 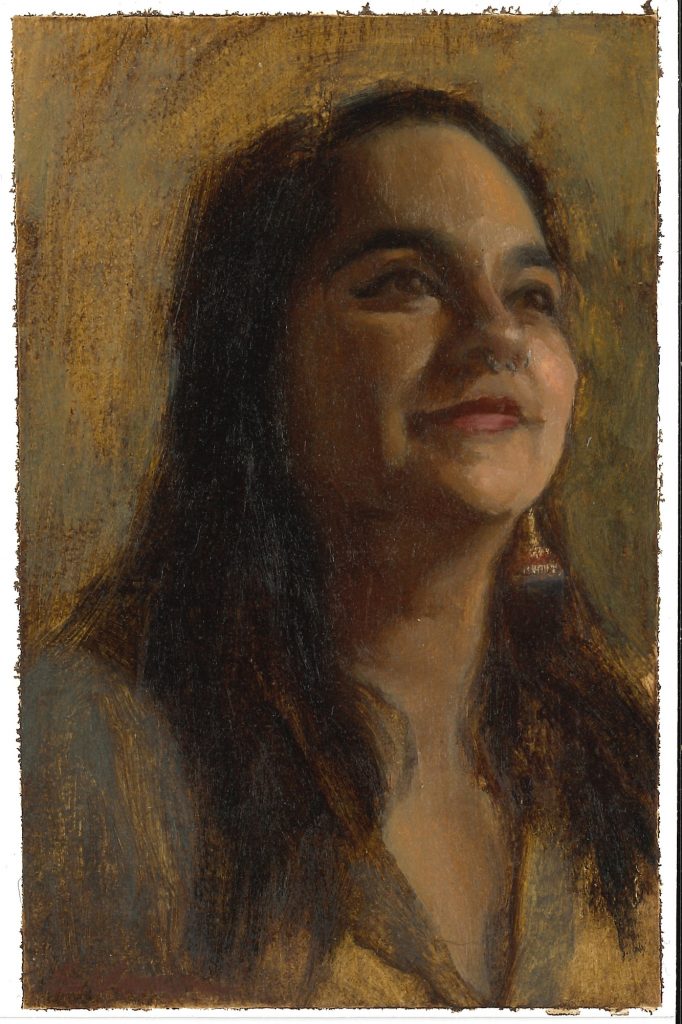 It was empowering to see her image and share her story at the museum, Khan said. Her writing is displayed alongside her portrait. She describes struggling with her identity while growing up Pakistani in Two Rivers.

“But now that I am older, I am learning to fully embrace my Pakistani side while also embracing the side of me that was raised here,” she wrote. “The side that loves living near Lake Michigan and sees the potential to make this area better and more welcoming for other people of color of people who don’t fit the white, conservative majority around here.”

Khan loves the show and her portrait, she said.

“I knew beforehand that (Sonia) was an amazing artist, but just seeing it was so weird at first because you don’t usually see yourself like that,” she said.

The show is designed to make Manitowoc residents consider how they do see themselves.

The works from Vasquez are part of a larger collection. The museum also asked residents to submit self-portraits. They’re incredibly diverse – both in terms of subject and style. Curator Diana Bolander has been particularly struck by the pieces from local schools.

Many of the kids depicted themselves in masks, capturing this very specific moment in time, she noted.

The portraits are displayed between two pieces of glass. Each artist was asked to answer a prompt from Vasquez on the back of their work: How do you feel about your identity in relation to Manitowoc? 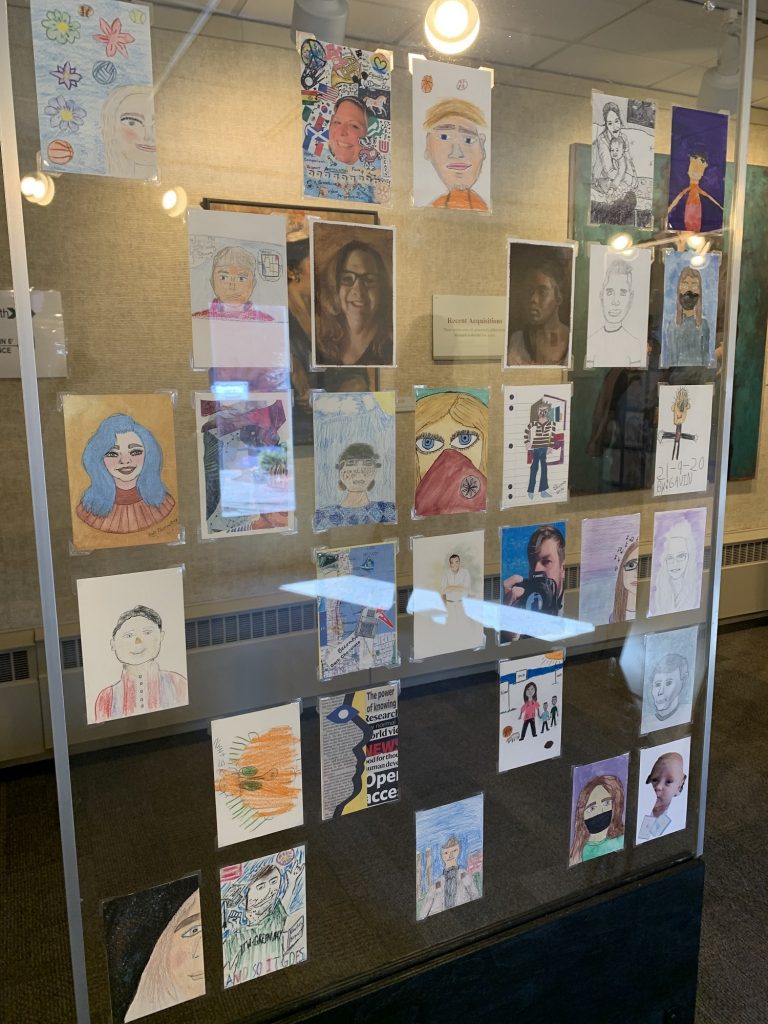 Some of the self-portraits made by community members as part of the “Portrait of Manitowoc” project. (Megan Hart/WPR) 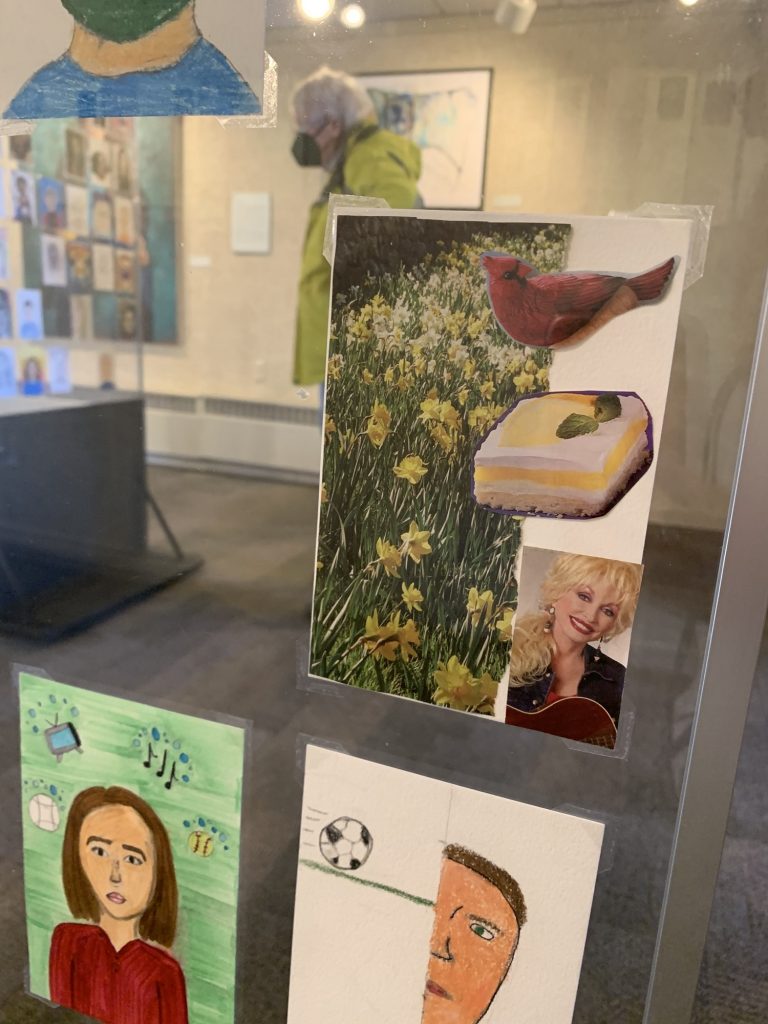 “Reading what people have written about their identities and how they feel about living in Manitowoc, it’s been really powerful for me,” Bolander said. “I feel like it’s been cleansing in a way for some people, and it’s been a real mix: people who maybe have some suggestions on how to make the community better and also people who really just love it here and want everyone to feel welcome.”

Manitowoc is a blue-collar city undergoing some major changes, she said.

“I think that really gives us an opportunity to think about who we are and who we want to be,” Bolander said.

Of course, the last year has been tough for lots of people. In addition to the coronavirus pandemic, the deaths of George Floyd and Breonna Taylor – Black people who were killed by police – spurred a national reckoning on race. On top of that, the United States held a contentious election.

“We are reflections of our communities and the greater world itself,” she said.

The Rahr-West Art Museum doesn’t have the most diverse collection in terms of the artists represented, Bolander said.

“So this is really an opportunity to make sure that everyone who comes into the door sees themselves in the art and in the artists represented, and that, I think, is a really powerful thing,” she said.

It’s time for more representation in museums and galleries, Vasquez said, and not just stories of struggle but art about everyday life. Vasquez, 28, is half Mexican. She said it wasn’t always easy to connect with that part of her culture growing up.

“It’s why now I’m so big on representation and so big on trying to provide those resources and outlets for other people that are going through the same thing I did,” she said. 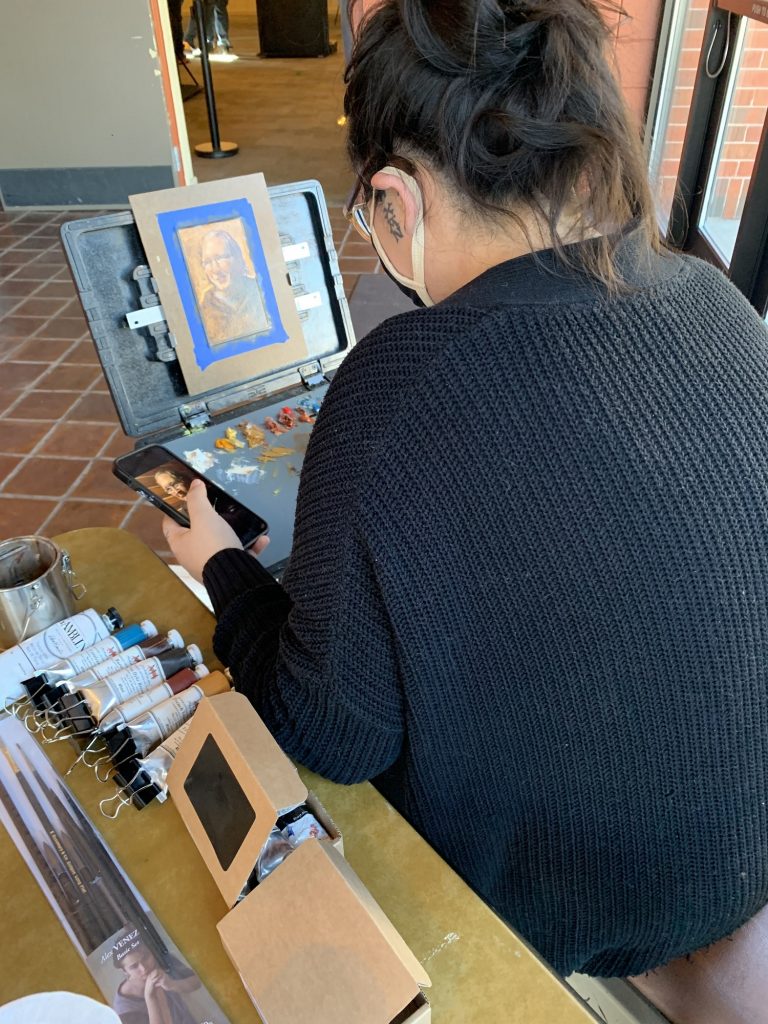 Sonia Vasquez paints a portrait at the Rahr-West Art Museum as part of the “Portrait of Manitowoc” project. (Megan Hart/WPR)

Vasquez is president of Lakeshore’s United Visionaries, a nonprofit that seeks to support local Black, Indigenous and People of Color, while uniting the entire Manitowoc community through education and understanding. Art and activism are the two constants in her life, she said.

She was grateful to have this project amid the pandemic, which has been a difficult time for many artists, she said. She wears a mask while painting live at the museum. Even socially distanced, it’s been great to reconnect with people in person, she said.

The Rahr-West collection is partially housed in a beautiful, old mansion on a hill. It’s a picturesque setting, but it’s not accessible to everyone, especially during a pandemic that threatens the most vulnerable.

Both Vasquez and Bolander acknowledged not everyone is comfortable visiting an art museum, so they designed “Portrait of Manitowoc” to be able to travel to other sites across the community, like schools and libraries.