When he’s not on tour, the 25-year-old rapper Ted Park keeps busy making music videos on the streets of New York City, writing songs for rising artists in Korea and the U.S., and cooking up sizzling hip-hop tracks of his own with longtime producer and fellow Madisonian, DJ Pain 1.

Listen closely, and you’ll hear shout-outs to his home state of Wisconsin, and a few nods to his hometown of Madison.

Park said his childhood years in Madison were quiet, full of basketball and book-reading. That changed when his family moved to Seoul, South Korea when he was 13 years old, after his father decided to launch a business overseas. Park said he was miserable: He missed his friends and struggled as a native English speaker in a Korean-language school. The move also made him grapple with complex feelings about his identity.

“I was not really proud to be Asian at that time,” he said. “Imagining myself living in Korea, with a bunch of other Korean people? I hated that, man.”

To cope, he started writing lyrics and recording himself rapping on his father’s webcam, posting the files to Myspace.

“For me to go to Korea, for my life to totally disintegrate…I wouldn’t have discovered music,” he said. “I’m very thankful I went. I got to find myself. And I got to get in touch with my roots. I actually became kind of proud to become an Asian person.” Park moved back to Madison to go to high school, determined to keep rapping. By his sophomore year, he dropped out to focus exclusively on his music. Soon after, he moved to New York City.

On a trip back to Madison in 2016, he met up with the Madison-based DJ Pain 1 — a veteran of the hip-hop industry with credits on songs by 50 Cent, Public Enemy and Rick Ross — and recorded a song about what it was like to come back to his hometown. The track, called “Hello,” became Park’s launching song. It went viral on Spotify, and helped land Park and DJ Pain 1 a record deal.

Over the next four years, he released new music and videos at a breakneck pace. Park eventually forged a creative partnership with the K-Pop superstar Jay Park, signing onto his Korean label, H1GHR Music.

Like most musicians during the COVID-19 pandemic, Park’s touring and major live shows have been put on hold. But that hasn’t stopped him creatively. Park is releasing one new song each week throughout 2020 for “Ted Park Tuesdays.”

Park said he used to describe his relationship with Madison as “love-hate.” He felt frustrated over the lack of support he felt as a young artist. Even now, he feels disappointed when he sees stories about hip-hop artists struggling in Madison. However, he said he learned to separate his career from the aspects he appreciates about his home: his friends, its natural beauty, and its sense of calm.

“When I think of Wisconsin, I think blue Mendota. I think family. And I think peace of mind,” he said. 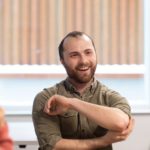 Erik Lorenzsonn is a writer based in Madison, Wisconsin. His work has been featured in Poughkeepsie Journal, the Capital Times, the Progressive Magazine and Wisconsin Public Radio.