Tobacco hangs to dry in the Watson family's barn in Edgerton, Wisconsin. (Photo by Kristen Durst)

Tobacco used to be a major cash crop in Wisconsin, but today very few farms remain. Those that do are primarily located in southeast Dane County. One of the rare tobacco farmers keeping this Wisconsin agricultural tradition alive is Curt Watson, a fourth generation tobacco farmer.

He farms eight acres near Edgerton, which is down from 14 acres just a few years ago. The government used to subsidize the industry, but it was deregulated around 15 years ago. And a federal tobacco buyout program to help ease farmers into an unregulated market made its last payments nearly five years ago.

“It’s hard to invest a lot of money into tobacco, because we don’t know how long it’s going to be around,” said Watson.

Watson and his family harvest tobacco in late summer. They cut each stalk by hand, spear it, and string it on a wood lath. 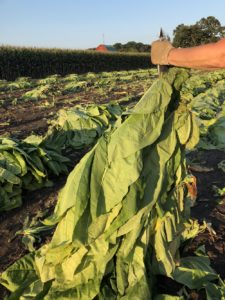 Tobacco is harvested on the Watson family farm. (Photo by Kristen Durst) 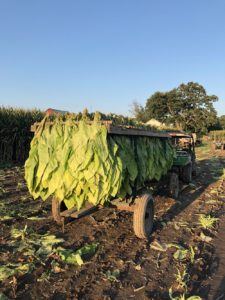 Tobacco is hauled away on the Watson family farm. (Photo by Kristen Durst) 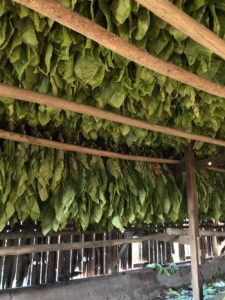 Tobacco hangs to dry on the Watson family farm. (Photo by Kristen Durst)

“Basically after we cut it, it will lay here,” said Watson. “If we have a good sunny day, it will lay here for a few hours. Then, the leaves get really pliable, kind of like a rubber. Then, it’s really easy for us to string up and then get it to the tobacco shed to dry.”

In Wisconsin, the varieties grown are solely for chewing tobacco. It’s an incredibly labor intensive crop, which is another reason why there are so few tobacco farmers in the state today.

And Watson said it’s hard to find manual labor, which is why family and friends are essential.

Tobacco hangs and dries in the shed all fall. It’s ready for sale in spring, after the moist, winter air has made it more pliable.

In mid-January, Watson’s friends, grandmother Marjorie Furseth, and her whole side of the family gather to strip leaves off of each stalk. They’re compressing and tying them in bundles for market. Watson’s daughter learned how to tie the tobacco this particular afternoon.

Furseth said this gathering is tradition.

“We have a lot of fun being together,” she said. “That’s why we do this once a year. The whole family clan gets together and we strip just to get together.” And while they were together, they talked a lot about tobacco and it’s rich history. Watson and his neighbor, Sheldon Schieldt, both have deep roots.

“It’s definitely the heritage of this area, said Schieldt. “There’s farms around here that were paid with tobacco money and it’s getting to be a thing of the past for the most part.”

“Going into town and seeing all of the big, big houses, they were owned by the tobacco barons the ones that bought the tobacco. There were some huge ones in town. Probably 25 or more tobacco companies at one time,” said Watson.

Watson said while it’s a little sad to reflect on the plight of tobacco in Wisconsin, there’s also a lot to cherish. Largely because he has so many fond memories, like working with his father and grandfather. Plus, the new ones he’s making in the tobacco fields with his kids.

“I’ve been brought up this way and I just enjoy it,” said Watson. “I’m sure it’s going to go away someday but I’ll probably be one of the last ones doing it.”

Correction note: A previous version of this story named Marjorie Forseth as Curt Watson’s mother. She is his grandmother. 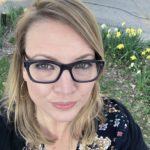