The view of the Armory taken from the Sheboygan Yacht Club as the early stages of demolition continue on Aug. 26, 2020. (Megan Hart/WPR)

For nearly 80 years, the Sheboygan Armory has overlooked Lake Michigan.

Completed in 1942, it was a project of the Works Progress Administration, the federal stimulus program that helped lift the U.S. from the Great Depression through widespread employment. Construction on the Armory began in 1941. It was a project of the Works Progress Administration. (Courtesy of the Sheboygan County Historical Research Center)

“There were no concrete mixer trucks at the time,” she said. “This was all handwork, and they wanted it to be that way.”

The goal was to employ as many people as possible, she said.

Despite its elaborate construction, the building cost just around $240,000 to complete – around $4.2 million adjusted for inflation – with the federal government covering about three quarters of its cost, according to Dippel.

The building cost $240,000 to complete. Construction began in 1941. (Courtesy of the Sheboygan County Historical Research Center)

The Armory served as home for a division of the National Guard and Sheboygan’s professional basketball team, she said. The art deco building was one of the NBA’s original arenas. Over the decades, it hosted major performers, political candidates and more.

“It was the center of community activity. It brought little Sheboygan, Wisconsin, a little more connection to the big world that’s out there,” said Travis Gross, executive director of the Sheboygan County Historical Society and Museum.

But after years of discussion, the Armory’s fate is sealed. The building, which officials say was expensive to maintain and difficult to renovate, will be torn down. Construction on the Armory was completed in 1942. It was an original NBA arena. (Courtesy of the Sheboygan County Historical Research Center)

It Was An Integral Part Of The Sheboygan Community

The Armory was full almost every weekend for 25 years, Dippel said.

“And then as mayor, when we were vacating the building, they brought a lot of stuff to my office, and we found an original contract from when Bob Hope appeared at the Armory,” he said.

National acts like Roy Orbison, Alice Cooper and Wilson Pickett held concerts at the Armory. Sheboygan’s very own The Chordettes performed there in 1947. Plus, the Harlem Globetrotters played on the Armory’s court many times over the decades.

Becker snuck out to see the band Ratt perform at the Armory and frequented professional wrestling events there. She wishes she’d had a cell phone as a teenager in the 1980s so she could look back on some of those moments, she said.

Like many Sheboyganites, Becker has lots of good memories of the building, but now she doesn’t even like to drive by as the inside is being stripped. She believes the building could have been a successful convention center attracting visitors to the area.

There Were Many Attempts To Save The Armory

The Armory last hosted a high school basketball game in 2007. Now, schools have their own gyms and other venues have opened around town, Dippel said.

“As we started getting theaters and auditoriums, it kind of shifted. People would soon rather go sit in a comfortable seat in a theater than on a wood bench at the Armory,” said Chad Pelishek, Sheboygan’s director of planning and development.

The building is large – 52,000 square feet – and has little insulation, he said. This postcard of the Armory was from the mid 1940s. (Courtesy of the Sheboygan County Historical Research Center)

Still, there were lots of attempts to repurpose it, Vandersteen said.

A space museum moved in for a couple years. A high school shop teacher considered working on the building as a class project. Joe Wolf, who led Kohler High School to a state basketball championship in 1999 before going on to play in the NBA, even tried to make the Armory home to the Wisconsin Herd, the G League affiliate of the Milwaukee Bucks. A group called the Armory Community Project secured about $1 million in pledges to preserve the building.

“Anything and everything was tried. I mean, it was valiant, valiant efforts to try to figure out an adaptive reuse for this building, but it just didn’t work,” Dippel said.

Sheboygan isn’t the first Wisconsin city to lose the building that was once the center of its social network, but when it comes to historic preservation, there are important questions communities need to ask, Dippel said.

“As you get further and further away from this Armory and the memories that our citizenry had, will the new citizenry have those attachments, and will that money keep coming?”

Preserving Its Memory For Future Generations

Pelishek and the staff at the city have been collecting memories, like Becker’s. Ultimately, they plan to put together a documentary on the Armory.

The Sheboygan County Historical Society and Museum is also working to preserve the Armory’s memory for future Sheboyganites.

The museum’s current exhibit, “Accessioning the Armory: Collecting and Preserving Sheboygan’s Municipal Auditorium and Armory,” features many original artifacts from the building including the center circle of its hardwood court.

“That piece of flooring has seen thousands of basketball players on it, including NBA players,” Gross said. Among the items on display at the Sheboygan County Historical Society and Museum is the hardwood from the center circle of the basketball court. NBA players once played there. (Megan Hart/WPR)

Gross, a Sheboygan native, said the whole city used to come together for crosstown rivalry games.

The museum also has benches from the Armory’s balconies, its original blueprints and the building’s cornerstone, which contained a time capsule. Inside there was a copy of the Sheboygan Press from the day the Armory was dedicated, the original WPA contract and other documents now on display at the museum. The Sheboygan County Historical Society and Museum preserved items from the Armory to keep its memory alive for future generations, said Executive Director Travis Gross. The building’s original blueprint, bench seats and the door to the ticket booth are on display. (Megan Hart/WPR)

“A lot of these items are things we thought could help us tell the story when it’s gone forever,” he said.

One corner of the exhibit includes ads and newspaper clippings from circuses, festivals and other events that took place at the Armory. A picture shows a packed house for an event recognizing school crossing guards.

“That photo there shows what the Armory was, it was a community facility,” Gross said. “It didn’t matter what it was, when they had an event there it was full.” 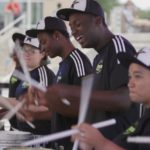 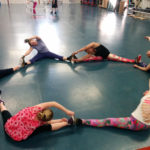