What are some of your early rock ‘n’ roll memories? For Stoughton’s Bill Amundson, there’s one that happened REALLY close to home.

It was a normal Saturday spring morning at the Amundson household on Nora Street in Stoughton, Wisconsin.  The year was 1960, and I was a seven year old boy watching Huckleberry Hound when my dad burst in.

He said, “The band that’s on the radio, they’re practicing in the garage right down the street!”  He then proceeded to hustle my brother and I down to the old Hanson Garage where we had a front row seat to a rehearsal by Stoughton’s very own “One Hit Wonders,” The Fendermen.

Phil Humphrey was living in Stoughton, working as a truck driver for the Omar Bread Co. and taking classes at the UW when he met Jim Sundquist of Niagara, Wisconsin.

The two quickly bonded over their Fender guitars and the unusual fact that they shared the same birthday, November 26, 1937.  They formed a duo, dubbed themselves The Fendermen, and began playing gigs at small clubs and bars around southern Wisconsin. Their first gig was at the legendary Oats Bin Tavern in Edgerton in 1959 in exchange for 5 dollars and all the beer they could drink. Their set was mostly country and rockabilly standards, but they couldn’t help but notice that folks went wild for their rather unhinged cover of the old Jimmie Rogers song Mule Skinner Blues.

Word of their frenetic rendition reached the owner of Sauk City’s CUCA record label, known primarily for polka. He saw them live at the Ideal Bar in Madison and enthusiastically agreed to record and press the tune. They tried selling the 45 on their own with little luck until a La Crosse DJ named Lindy Shannon became obsessed with the song and played it into their local top 10.

From there, it was picked up by the SOMA label out of Minneapolis, who released it nationally and sent it soaring into the Billboard Hot 100, where it reached #5 in June of 1960.  By the end of the summer Mule Skinner Blues had sold well over a million copies.

The song was…unusual.  It featured just the two Fendermen, drenched in echo, no drums or bass, with Humphrey’s delirious whooping and yodeling.  Highlights included a number of deranged “Yuk Yuks” and “Ha Ha’s” and concluded with the classic “Cha Cha Cha!” One writer described the tune as “Jimmie Rogers meets the Ventures on a 3 day bender” and another called it a “crazed, pickled in reverb hoot-fest.”

As the song took off, the now-4 piece band continued to rehearse in that old garage on Main Street in Stoughton, and we kept a lookout for them so we could gather outside at a moment’s notice.  They never seemed to mind the legions of kids peering under the garage door to get a peek at the newly minted stars. The sheer volume and reverb were nearly overwhelming, but it didn’t phase me and the others.  Mostly, we stared in reverent, jaw dropping awe. After all, The Fendermen – although practically teenagers themselves – were the biggest celebrities any of us had ever seen in our short small-town-Stoughton lives.

By summer’s end they’d opened for Johnny Cash and Kitty Wells and appeared at the Grand Old Opry.  A performance on Dick Clark’s American Bandstand would follow, where they shared the bill with teen heartthrob Bobby Darin, who seemed downright subdued by comparison.

They released a full album, called, you guessed it, Mule Skinner Blues, and continued to play as a popular live act.  But amidst legal wranglings with their record company, and without a follow-up hit, they disbanded in 1961.

Humphrey and Sundquist eventually left Stoughton and went their separate ways, ultimately settling in Minnesota.  Both dabbled in music from time to time, and in 2008 they played Mule Skinner Blues together in Green Bay for the first time in 45 years. Sundquist died of cancer in 2013 and Humphrey followed in 2016, of heart failure.

But Mule Skinner Blues lives on.  To date it has sold over 4.5 million copies worldwide and is a staple on oldies radio stations everywhere.  It inspired a generation of garage rockers and spawned “psychobilly”, a genre of music that includes such luminaries as The Trashmen, The Cramps and the Reverend Horton Heat.

The Fendermen may have provided Stoughton with only a footnote in the history of American music, but they made a lifelong rock and roll fan out of one 7 year old living just around the corner on Nora Street.

This essay originally aired on January 8, 2020 and was published in the Stoughton Courier Hub. 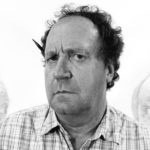 Bill Amundson is a Stoughton based artist and substitute teacher who occasionally dabbles in music, writing and humor.