The Heist offers a community space for creativity in Ripon, Wisconsin. (Photo by Ayisha Jaffer)

There’s a place in Ripon that’s providing a space for musicians and artists to get as creative as they want to. At The Heist, organizers have converted a former bank into a community space that they hope will bring people together. Ayisha Jaffer recently spent a weekend there and introduces us to the makers at The Heist.

Sam Luna is a musician, creator, curator and educator. He’s traveled across the nation, searching for his artistic home in places like New Mexico and Los Angeles, with a goal of starting a project that amplifies a greater artist community.

“I had always wanted to be a part of an art project,” said Luna. “I really thought that talking about Wisconsin. I find myself more inspired here than most places I go to. The musicians that are here, the artists that are here — I really wanted to let people know about that.” 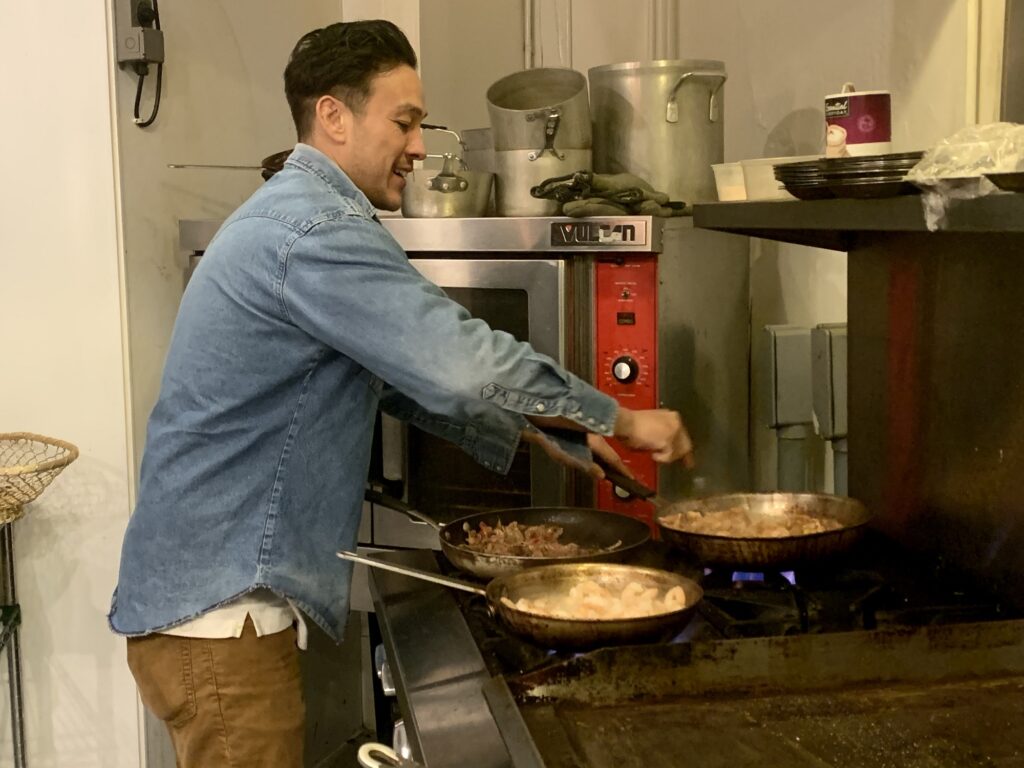 Sam Luna cooks for the musicians, artists and visitors at The Heist. (Photo by Ayisha Jaffer)

It was actually love that brought Luna to Wisconsin, but his passion for the creative community keeps him here. His first experience was in Kenosha booking shows, everything from music to spoken word. It’s also where he found music with a little nudge from a local artist, J Hardin, of Coyote Brother.

“I quit my job one day without even thinking about it. I’d written one song and figured I would just try it. That was 15 years ago,” said Luna. “That’s when I started doing music and art.”

Luna’s music took him all around the state, but when he was asked to play in Ripon, he had no idea his life was about to change.

“So I took the road in, turned the corner, saw this building and I got goosebumps. I saw the downtown. It’s a really beautiful community,” said Luna. “There have only been three places that have made me feel that way in all the different travels.” 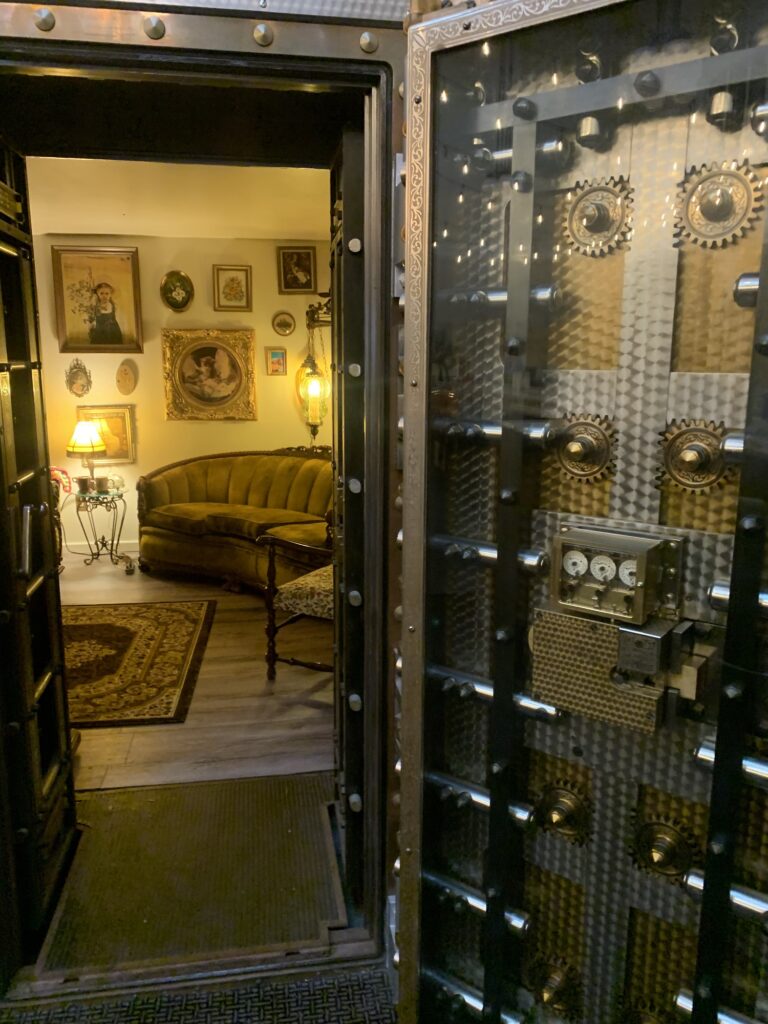 Inside a vault in The Heist (Photo by Ayisha Jaffer)

Luna became fascinated with *that* building. A year later, he acquired what is now the art space known as The Heist. Before this, the building had taken on many forms as an opera house, venue, and a bank. It’s time as a bank tied directly into a piece of Luna’s family history and his grandmother, Eleanor Holle.

“She played music, some jazz music at night. Robbed banks during the day. When I walked into this building for the first time, it felt like a full circle moment,” said Luna. “She found herself in a situation where she thought the only way to provide for herself or her family was through robbing a bank. Here came an opportunity to be able to take a bank and give it back to the community.”

When you spend time at The Heist, you can feel the inspiration was permeating throughout its walls.

“It’s a place to create, inspire, educate and collaborate,” said Luna. “Using those in every bit of the arts through food, textiles, music, art,  community. It’s a place to be able to come together, learn together and inspire each other. That’s really what I want people to come in and feel from the space.”

One of the musicians using the space is Tae of Green Bay.

“It makes it more colorful here and I don’t mean that just in an artistic way. I think that the diversity that we bring in from different people, from different cultures and just different mindsets —people aren’t used to that here. So I think that’s one of the most valuable parts.” 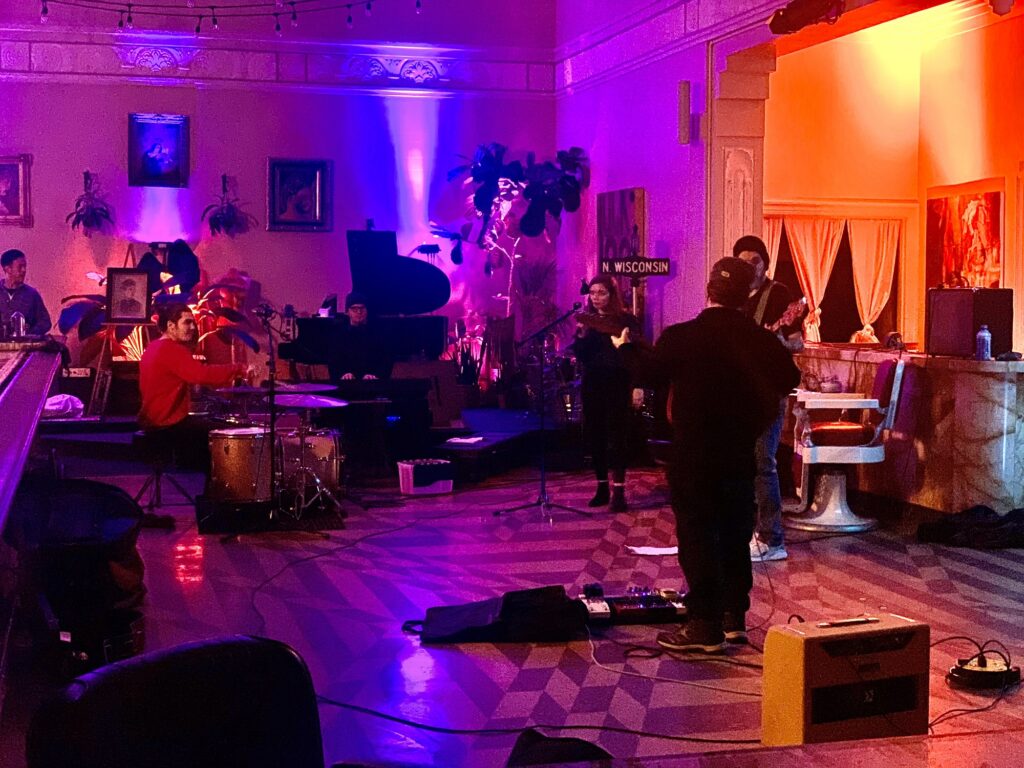 Tae and fellow musicians rehearse at The Heist. (Photo by Ayisha Jaffer)

While Tae rehearses with her band in the main lobby, Aaron Duesterhoeft is in another part of the building called “The Hide Out.” He’s the resident audio engineer and recording Tae one level above her.

“I’ve met so many people doing this project that I would never have. I’ve dabbled in art the way I never have. It brings people together in a really intangible way,” said Duesterhoeft.

Downstairs, McKaela Christenson and Mack Marbas of California are working on textiles from their farm-to-closet project, Yellow Hill House Studios. 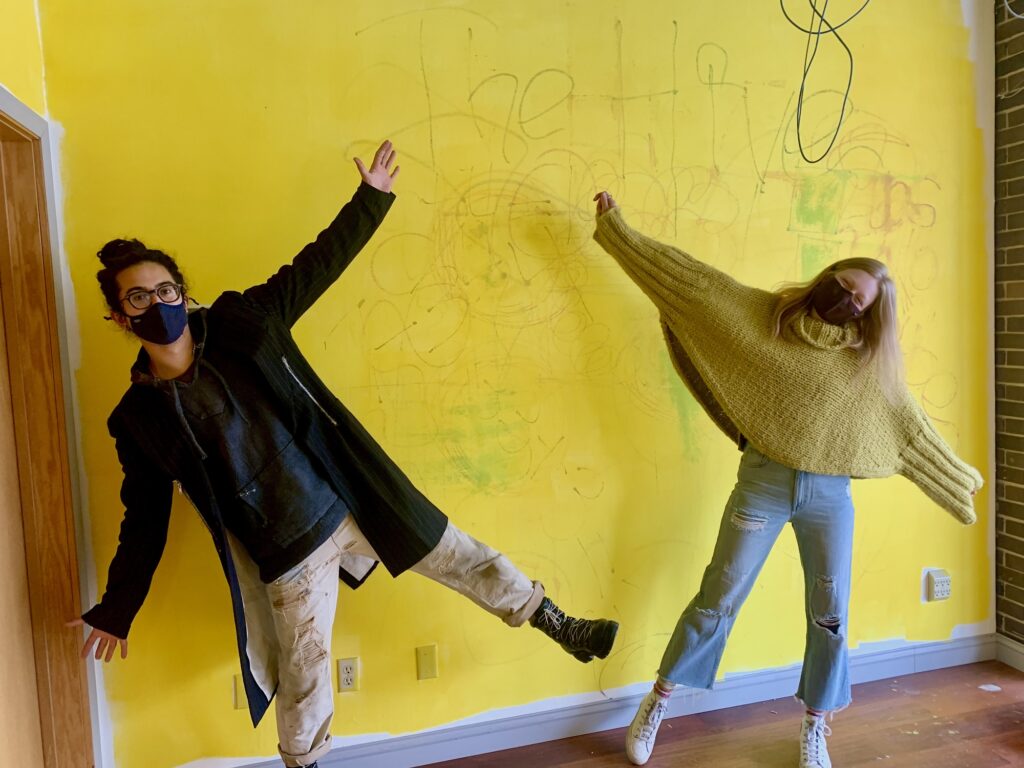 During this pandemic, Luna says The Heist continues to support and highlight their artist community.

“Musicians, artists, sound engineers, lighting crew — there are so many different people that are affected with this shutdown that are involved with the arts,” said Luna. “Remember that each individual person is a small business, so let’s find ways to come together to help those small businesses. I think that’s what the goal of this space is to try and gather people together and help, even if it’s to bring awareness.” 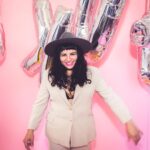 Ayisha Jaffer has a passion for being in the shoes of many different lifestyles from punk rocker to park ranger. She’s been a storyteller, musician, DJ, and most recently, a radio host at 88Nine Radio Milwaukee. For 15 years, she traveled from New Zealand to Alaska and everywhere in between,...