Every spring, when the wild parsnip sprouts and the elusive salamanders begin to breed, the team at Mequon Nature Preserve calls in backup to do important conservation and restoration work.

But during a brisk fall day — with her tail wagging and a few small, excited barks — Tilia, a chocolate lab, is impatient to get the show on the road.

She’s wearing a vest, which in her mind, means only one thing. She’s about to go on a search — and treats are waiting on the other side.

While she may be looking for a treat at that moment, when she’s on the job, she’ll be sniffing out invasive and endangered species in the nature preserves’ prairies, forests and wetlands.

Cory Gritzmacher, the director of operations at the nature preserve, said Tilia is far better at searching than even the highest trained human professionals — canines can be up to 40 times more efficient than people.

And not just at detection. With timing, she’s far quicker. She can search less invasively than people can. Take wild parsnip. Tilia can find parsnip in its first year, when it’s close to the ground and hidden by other plants. By the plant’s second year, it has already started to seed and spread rapidly.

“The best trained volunteers or staff in the world won’t even be able to find what a canine can,” Gritzmacher said. “That’s the pretty impressive part of it. And who doesn’t want to go to work with a dog?”

Just who’s in charge, is up for debate.

“I often joke, it’s not necessarily us training, it’s kind of them training us, like this is what you have to do if you want me to do something for you,” he said. Tilia is highly motivated by food — or toys. Gritzmacher says being motivated is the key to being a good conservation dog.

“Dogs in general already have up to 200 million olfactory sensors,” he said. “We have about 5 million. So they’re already set up and designed for scent detection, it’s really just finding a dog that’s motivated, that wants to do it on a regular basis and is excited to do it.”

Four years old now, Tilia began training as a puppy. It was slow at the start, with treats hidden in cardboard boxes.

Then it got progressively more challenging, until she graduated to what Gritzmacher calls pairing — when he places scent samples in a salt shaker. They’re much more appealing with a treat sitting on top.

“Eventually we’d start taking the treat away,” he said. “As she continues to hit on the correct scent, then she gets rewarded. So she’s going to get paid again. We do our work, we get paid. She does her work, she gets paid.”

Finding scents is a bit of a mind game and an obstacle course for her to work through, Gitzmacher said. But with training, the possibilities for what she can detect are essentially endless.

So far, Tilia has been focused on wild parsnip and salamanders, but there are plans to expand her monitoring range to include bees, crayfish and even some tree diseases. Tilia explores a field of tall grass during a demonstration Wednesday, Oct. 28, 2020, at the Mequon Nature Preserve. (Angela Major/WPR)

While Tilia’s nose is the star — when it comes down to it, the success of the endeavor is as much about the rapport and relationship between the dog and the trainer. If Gritzmacher hadn’t trained Tilia, he wouldn’t be able to pick up on her subtle body cues, like if she gets distracted by a deer or rabbit and veers off course.

And when she’s not chasing down salamanders and wild parsnip, Tilia steps in as an ambassador for the nature preserve that has spent the last 15 years actively restoring its 444 acres from farmland, back to its native wetlands, forests and prairies.

Using dogs for conservation work is the same idea as police or search and rescue dogs. While Tilia was the only conservation dog in the state for several years, she now has company, and Gritzmacher only expects that number to grow.

“Canines are going to start to play a huge role in the conservation field just because of their amazing detection skills, especially when resources are limited, staff is limited and you have to search potentially thousands of acres or miles of shoreline or whatever,” he said.

It’s tough work for her. Gritzmacher says she gets worn out from a long day at work just like we do.

Tilia’s owner is the director of the Mequon Nature Preserve. At the end of the day, she gets to go home, be the family dog, and take some well-deserved time off. 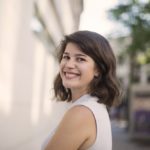