Under bridges: A parent finds peace in independence and letting go

You don’t have to travel far to find adventure. Writer Jill Sisson Quinn and her son recently spent an afternoon at a local park where he had a run in with both stinging nettle and a fallen log, causing her to reflect on the lessons to be found in independence and letting go.

I take my son to Stedman Wayside Park in Portage County. I happened upon it once fifteen years ago and haven’t been there since. That was after I’d just moved to Wisconsin from a place and at an age where I measured hikes in tens of miles and thousands of feet in elevation gain. Stedman’s trail-less 24-acres, with its single grill and picnic table, was a puzzle I was not equipped, at the time, to understand. Now the mother of a seven-year-old, my priorities have changed.

As soon as he steps from the car, my son begins to forge a path downstream from the Tomorrow River’s small waterfall, alternating between the riverbank’s deep mud and lush foliage and the water’s large rocks and fallen logs.

I point out skunk cabbage and tear off a section of leaf for him to smell. He points out a tiny chute of crystal clear water pouring from the steep hillside beneath a tree’s raised roots. All of a sudden, I notice the underside of his forearm is covered with alarming red dots. My eye glides over to a jagged-leaved plant. 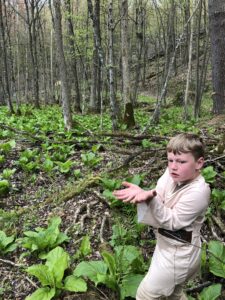 “Stinging nettle!” I exclaim. He’s seen it before, but this is his first time touching it.

We kneel down and cover his arm in black mud from the river’s bottom. I pick off a few stems of jewel-weed and offer the plant’s aloe-like salve but he has already moved on.

The forest becomes too thick, and he turns to make his way back upstream. I pull out my phone to take a photo.  I watch as he slips on a mossy log over the water, grabs it with both hands and both feet and rolls completely under, hanging like a baby chimpanzee beneath its mother’s belly.  The creek wets him from the collar of his t-shirt to the tops of his boots.

“Let go!” I say, and he does, rights himself, and wades out, flinging off water and laughing with joy at his soaked body.

Back at the car, I suggest viewing the river from the road. We walk there, and he wants to go down to the water again.  We descend beneath the road bridge to the piles of granite beneath. My son begins to launch the rocks into the river, seeming to enjoy this place and pastime even more than exploring the official park.

Watching him, I remember how much time I spent as a child under bridges: railroad bridges out-of-use; railroad bridges in use, road bridges. With my best friend, the neighbor boys and my older sisters, I climbed over guard rails and jumped onto concrete pylons; followed their gentle declines, careful not to slip, to the riprap beneath; avoided snakes and poison ivy to cast my father’s old fishing rod and plunge into deep, dark swimming holes. Once, my friend and I scientifically narrowed down from a patch of weeds near a particular bridge just which plant was making us itch — our first time, like my son today, with stinging nettle. We touched it repeatedly, laughing gleefully at the plant’s fierce but short-lived war against our skin.

This, I think, is what my son needs more than anything. Not a hike with his plant-identifying mother on a recognized trail with a destination, but a bike, a friend and bridges to climb under. He needs a rushing creek to receive his skipped stones, baited hooks and half-clothed body, the adult world just a rumble above as cars pass to and fro toward unnecessary destinations, their hum an untranslatable language, like the mumbling of the parents in the classic Peanuts cartoon.

And what I need is to be fearless and noncritical, to stop ignoring the waysides, to let my son’s world expand to wherever he wishes. To as close or as far as he can peddle without me, to as high or low as he wants to climb, to as large or as small and as secret a place as he can find.