“I’ve been a competitor my whole life,” Andrew said. “In high school football, wrestling and track I did pretty well.”

To most University of Wisconsin-Madison students, a dorm room offers hardly enough space to sleep, study and socialize. Yet Andrew has found a way to fit a ninja warrior training facility within the narrow walls of his Sellery Hall room.

Andrew is an extreme athlete training for the television show American Ninja Warrior. Instead of waiting until after college graduation, Andrew decided to begin his ninja warrior career early.

Starting with his dorm room, Andrew converted his limited living space to suit his training needs by installing equipment to strengthen his grip and improve his balance and agility.

“It’s a lot of pull ups. You need to be trying out the salmon ladder and cannonball alley. Otherwise you’re not going to be ready for the actual show.”

After months of training, Andrew discovered the perfect opportunity to put his new skills to the test: a college edition of Team Ninja Warrior in Los Angeles. Wasting no time, Andrew registered a team with his fellow students Zack Kemmerer, an experienced ninja athlete, and Taylor Amann, a pole vaulter for the Badger track and field team.

Team Wisconsin would begin the competition with races against Big 10 rivals Maryland, Michigan and Ohio State. Each member of the team would run the same obstacle course against a student from the opposing school.

“Standing at that start line, it was a lot of adrenaline. I knew I had to go fast.”

The months of training payed off, as Andrew and Team Wisconsin dominated their competition and won their first 15 races to qualify for the tournament finals against MIT.

After a slow start in the final relay race that put the Badgers behind by about 15 seconds, Andrew knew he would have to run, climb and swing faster than ever to give his team a chance to win the championship.

“So I turned on the burners and I went as fast as I possibly could and I made up a ton of time.”

Andrew made up enough time, but just barely. In a photo finish, Zack Kemmerer pressed the buzzer only a ninth of a second before MIT to give the Badgers the win.

After savoring the narrow victory, Andrew has turned his attention back to the future. He will attempt to qualify for the individual show once he graduates from UW-Madison. 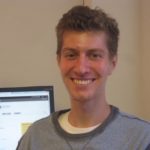 Eric Cummings is a production assistant for the “Wisconsin Life” project who enjoys exploring state parks, cheering on the Badgers and warm summer nights at the Terrace in Madison.