UW-Milwaukee Musicians Play On Amid Pandemic

On the stage of UW-Milwaukee’s Bader Concert Hall, clear rain ponchos hide clarinets, white cloths cover trumpet bells and special masks go over the mouthpieces of flutes. No one speaks as the conductor begins the first 30-minute session of precious rehearsal time.

While most classes are online at UWM due to the COVID-19 pandemic, performing arts classes — like band — must adapt to create a safe, in-person learning environment. Since aerosol spray from the mouth spreads through the bell and even keys of wind instruments, companies have designed coverings to contain most of the spray.

“That along with the spatial social distancing and proper ventilation in the room is about the best we can do right now,” said Dr. John Climer, UWM’s Director of Bands and professor of conducting.

Although the instrument covers make in-person ensemble rehearsal relatively safe, Climer said they do cause challenges. Many covers were backordered for weeks due to high demand across the country, and it isn’t always easy adjusting to them.

“Some of the covers don’t work as well as I had hoped,” Climer said. “Some of them don’t fit as well as they need to or give the players enough room to negotiate all the keys — especially the clarinet covers and the saxophone ones to some extent.

“The brass, we have it a little bit easier. We just get fabric covers that go around the bells of our instruments,” said Anna Wisniewski, a UWM junior majoring in instrumental music education. She plays French horn in the Symphonic Band.

One of Wisniewski’s first assignments this semester was to practice with her instrument cover on in order to get used to it and determine pitch tendency.

“I do feel like the sound is a little bit more muffled, and that’s just because the sound is coming out of a bell,” Wisniewski said. “You put something over the bell, there’s going to be more resistance.”

“We’ve found that the covers cause the instruments sometimes to go flat, so there’s some pitch issues to deal with,” added Climer. “Certainly when you’re spacing folks out at least six feet apart — sometimes more —there’s the challenge of trying to keep the precision and the rhythm together. If you’re doing chamber music, like we do with the Wind Ensemble, it’s so important for the musicians to be able to see each other.” The musicians are often seated in a 7 by 7 “grid,” with each chair spaced six feet apart. Chairs face straight-forward instead of angled in a traditional crescent shape, so students must listen closely to each other and watch the conductor. An ensemble can only rehearse for 30 minutes in one room — then they have to clear the space and let the air circulate.

“In terms of hearing the conductor, one of the rules — and I’m sure that they’re pleased — is that we’re not allowed to talk at all during rehearsal, because more talking equals more aerosols that could potentially be in the air,” Wisniewski said.

Both ensembles continue to challenge students with the concert repertoire, featuring pieces like Frank Ticheli’s “Vesuvius.” Some composers, like Ticheli, are actually writing arrangements to accommodate for fewer musicians on stage at one time.

“So a lot of composers have come up with what are called flexible, ‘flex,’ arrangements, where there are five or six parts that can be doubled by some of the instruments,” Climer said.

“It’s a difficult piece for intermediate to intermediate-advanced bands. We’re playing that, except it’s written for flex band,” Wisniewski said. “Frank Ticheli and his arrangers were able to condense that wonderful piece into five voice parts. So we can still get the full experience of playing ‘Vesuvius,’ it just is a little different.”

The music department only loans university-owned instruments to one student at a time this semester. Lessons take place over Zoom or in-person with a clear curtain dividing the studio room. Directors encourage students to use their own music stands and require them to wear a mask when not playing, even for just a few measures of rest during a piece.

“Sometimes you’ll be on a part and you’ll show up to rehearsal and be only one of two people there because the other three on your part are quarantined,” Wisniewski said. “So they’re really asking us to be flexible and be able to adapt in the blink of an eye. You have to be ready to change and I think that’s the hardest part.” Every music class — not just the ensembles — looks different now. Climer teaches his conducting class in a hybrid format. Wisniewski is learning how to teach musical concepts for secondary education using online platforms.

“A lot of the education majors — we all have a fear of, ‘Are we going to be fit educators for a real 21st century in-person classroom experience? What if we don’t have the same experience and the same strategies that in-person teachers have?’” Wisniewski said. “I hope that future employers keep an open mind to that because nobody asked to learn how to be a teacher online.”

Wisniewski hopes to be a middle or high school band director when she graduates in 2022 and she hopes COVID-19 won’t be such a large threat by then.

During March through July 2020, about 34% of those employed in arts and entertainment in Wisconsin filed initial claims for unemployment, according to the Wisconsin Policy Forum.

UWM’s Wind Ensemble and Symphony Band recently recorded concerts for an online-only audience. They each plan to have an in-person concert later in the semester, with a limit of 50 audience members in the 750-seat concert hall. 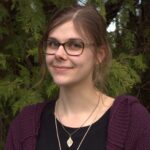