Editor’s Note: Love it or hate it, winter is unavoidable in Wisconsin. Commentator Wendy Lutzke learned to embrace the season and urges you to do the same.

The dictionary defines the four-letter word snow as “solid precipitation in the form of white or translucent ice crystals of various shapes.” People living in Vilas County, home of the Snowmobile World Headquarters, might equate snow with the four-letter words “good” or “cash” since their winter economy depends on it. Of course, not everyone always feels that way about it.

My relationship with snow started several years ago, when my husband Steve decided to build a cabin on our 20 acres of hunting land in Vilas County.  As Steve and his brother Bill measured space for a building site, I challenged myself to walk the perimeter of our newly purchased land. In February. What was I thinking? Not far along into my “plunge” (certainly NOT a walk), I found myself repeatedly sinking thigh deep in unending drifts of the white torture. Too proud to be defeated, I eventually made it all the way around. Maybe “good” was not the four-letter word for “snow” that day.

Since then, snow and I have become acquaintances, good friends, and sometimes competitors. My journal entries over the years attest to our growing relationship.

The snow can be like whipped cream perfectly topping the pine boughs or, after just a few degrees warming, like glue on first graders’ art projects, stiffening into odd shapes hanging off the birch branches.  Sometimes we’ve driven up to the Northwoods in bushel basket snow, the kind where you’re sure that someone is dumping that basket directly on your windshield every few minutes. At other times we’ve awakened to an October snow so heavy it took 20 minutes to clear off our car.

Snow often gives away secrets.  One March morning we found brown pine needles and tiny pinecones splayed over the surface of the snow, like confetti left over from the woodland creatures’ big bash.  Another time we followed the perfect tracks of a grouse until we found its takeoff point — delicate wing indentations spread across the snow until the moment before it left the ground. Hundreds of animal tracks—deer, turkey, squirrel, the elusive snowshoe hare, and whoa, is that a bear print?  They remind us that no matter how quiet the winter woods are, we are never alone.

The wonder of winter snow in Vilas County is sometimes humbling. During my first cold, snowy deer hunting venture, I felt like an intruder transported into a silent, black and white film.  I entered the woods at pre-dawn. A fresh layer of snow had fallen overnight. That, combined with the gray skies and black trees, completely surrounded my tiny island of blaze orange. I felt appropriately small and insignificant.

Snow can make its entrance just in time for Cranberry Festival in early October and leave after the runners have sloshed through 26.2 miles of it during Journeys Marathon in mid-May.  That’s just how it is in Wisconsin’s Northwoods.  I can choose to avoid it since I don’t live in Vilas County year-round.

Four-letter words are often associated with the profane. But during the crisp, clear days from December through February, I truly enjoy snow’s unblemished beauty. It’s then I know that my four letter equivalent for snow is L-O-V-E. 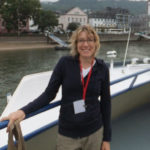 Wendy Lutzke is the museum educator at the Maritime Museum in Manitowoc.