The Grateful Dead, featuring Bill Kreutzmann, Bob Weir, Phil Lesh, and Mickey Hart, playing on stage at the Sound Storm Festival with the audience in the background. (Courtesy of Wisconsin Historical Society)

In 1970, long-haired hippies and flower children from across the Midwest converged on a small Wisconsin farm for a weekend of peace, love and music. The Sound Storm music festival’s lineup was stacked with mostly regional artists, but also included The Grateful Dead, who played a five hour set. 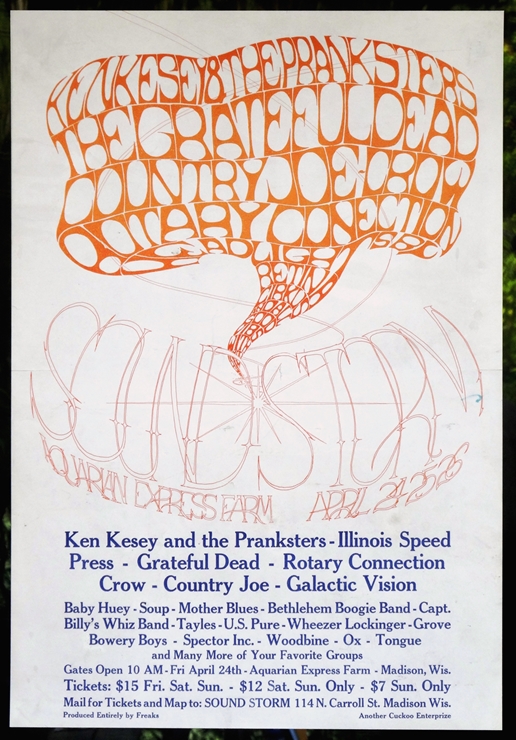 It was April 1970 in Poynette, Wisconsin — of all places — just a few months after Woodstock. People wondered whether Woodstock could be replicated other places. So there was a little momentum to see what could be done.

There was a local promoter of youth events who had the initial idea for Sound Storm, but that was before Pete “Bobo” Obranovich showed up. Pete was a biker who had been living on the West Coast and met The Grateful Dead in San Francisco and stayed for a while at Ken Kesey’s farm. He lived to make a little money, ride his bike, have a good time. And he envisioned doing that for tens of thousands of people at once. 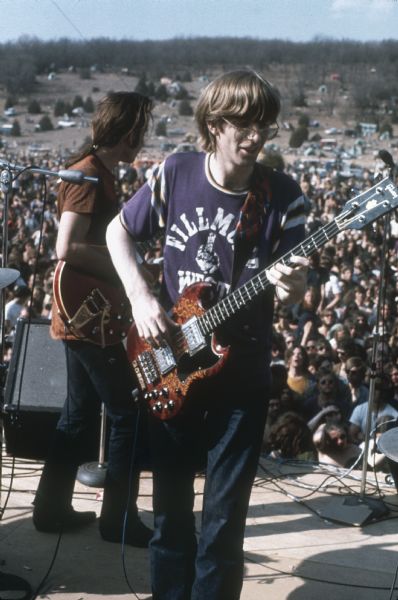 Phil Lesh and Bob Weir, bassist and guitarist (respectively) in the Grateful Dead, mid-performance at the Sound Storm festival. The bass guitar is made by Gibson, and Phil Lesh’s t-shirt reads “Fillmore West.” In the background is a large crowd at the York farm. (Courtesy of Wisconsin Historical Society) 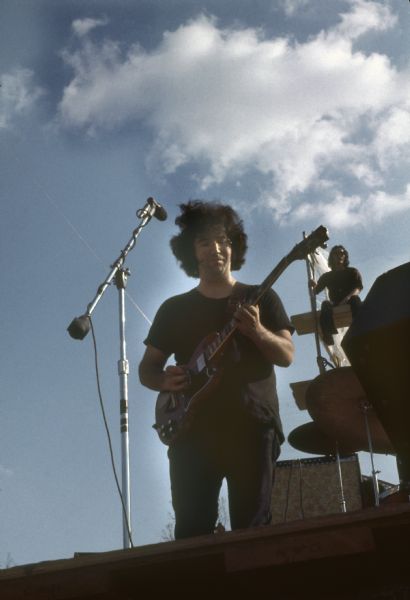 Jerry Garcia, guitarist for the Grateful Dead, playing on stage at the Sound Storm festival. An audience member is visible sitting on the scaffolding behind the stage. (Courtesy of Wisconsin Historical Society) 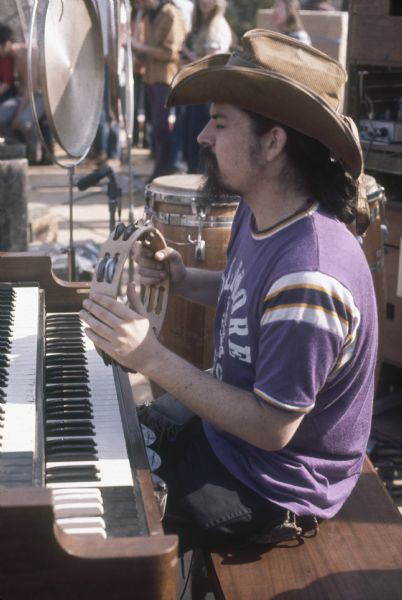 Local officials in Poynette did everything in their power to stop it. You had a wonderful — almost idyllic — law-abiding small town of several hundred people where literally the churches outnumbered the taverns. They were terrified of being outnumbered 20 to one by beatniks and hippies and bikers. 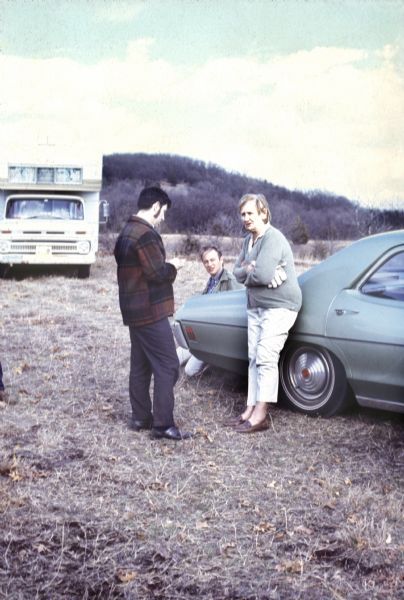 As one of the selectmen said, “We didn’t know if they’d smash the windows and burn the whole town down.”

That gained some press and a grandmother up in Poynette who had a big sprawling farm and didn’t get along real well with her neighbors, said, “Why don’t you come up here and see if you can have it up here.”

That farm, the farm of Irene York, turned out to be a perfect place for a festival and she agreed to let them lease it for $5000.

As her son said in an interview, “Mother didn’t care what the people of Poynette thought and she told them so.”

Tens of thousands of people streamed in and out of the York farm over the course of that weekend. The weather was gorgeous, around 80 and sunny. There was a little creek behind the stage and people swam naked in the creek, played in the mud. 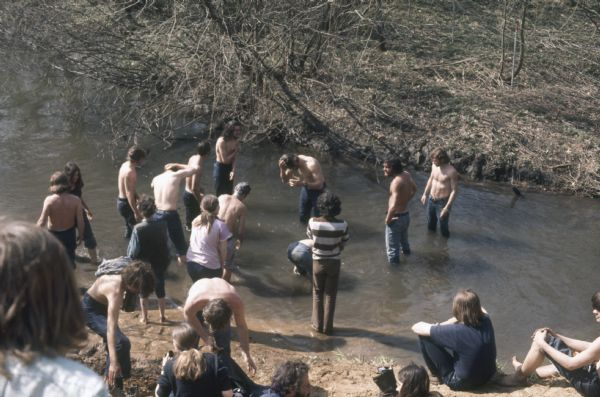 A group of young men and women bathe in Rowan Creek near York Farm during the Sound Storm music festival. (Courtesy of Wisconsin Historical Society) 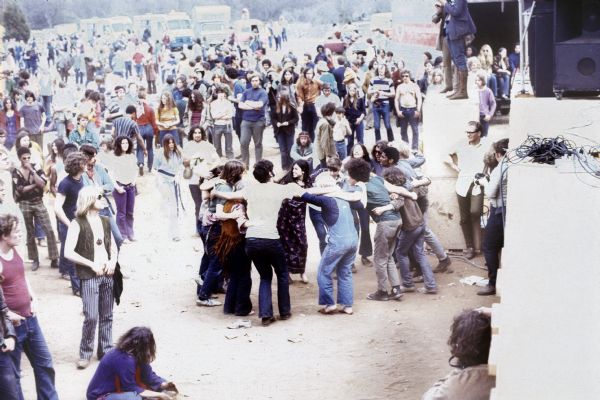 A crowd of people in a circle are dancing at the foot of the stage at the Sound Storm music festival. Other audience members are standing around them watching. (Courtesy of Wisconsin Historical Society)

Almost everyone I spoke to who went said that they remembered it vividly and it changed their lives somehow. It proved to them that it was possible for 30,000 strangers to get along peacefully 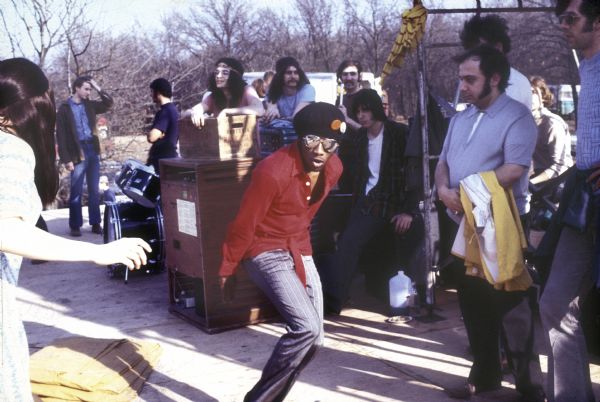 A man wearing a beret with two buttons on it dances across the stage. An audience member on the left is also dancing, and stagehands and photographers crowd the rear of the stage area. In the background, the band The Tayles lean on equipment. Left to right: Scott Eakin (wearing headband), Jeremy Wilson, Ken Ross, and Len Epand. (Courtesy of Wisconsin Historical Society)

“Wisconsin Life” is celebrating its 10th anniversary on WPR this year. One way we’re commemorating this milestone is by asking producers to share their favorite stories. Caryl Owen, a former technical director at WPR, tells us why this is her favorite story:

“The first ‘Wisconsin Life’ piece that came to mind was this one. I love the fact that the Dead’s obsessive documentarians have yet to find audio from this show. I hope that someone finds a reel to reel in a box someday. I enjoyed mixing this piece, I loved the story (and Grandma York) and I’ve been a Dead fan since high school, first saw them in February of 1971.”

While music fans and Deadheads dream that the concert tapes will be uncovered one day, there is video footage from Sound Storm. It was featured on WKOW’s “Our Wisconsin: An Hour In 1970.” 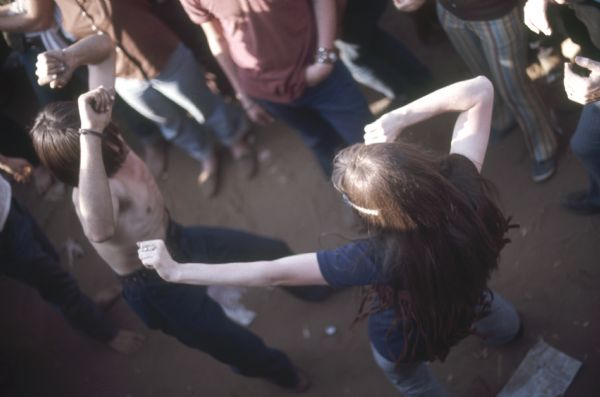 Overhead view of two people dancing in the crowded audience during the Sound Storm music festival. One of them is shirtless and the other wears a dark blue t-shirt with a headband in his or her hair. (Courtesy of Wisconsin Historical Society)

Caryl Owen is the former technical director of To The Best of Our Knowledge.