UW-Madison sophomore, Chandler Davis, has successfully petitioned the university to bring back boxing as a club sport, following a 54 year absence of the sport on campus. In 1960, a UW-Madison boxer died following a match and boxing was banned. Chandler already has practices ongoing and expects to have the first matches sometime while he’s still a student here. 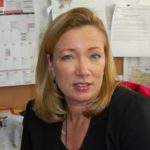 Frederica Freyberg is a reporter for the “Wisconsin Life” project who once won a sportsmen’s club fly-fishing casting contest up north and turned the tackle box prize into a makeup case.