On Madison’s near east side, the final weekend in July is rung in with bouzouki music and baklava-fueled joy. Assumption Greek Orthodox Church has hosted the city’s longest-running ethnic festival, Greek Fest Plus, for the past 55 years thanks to the enthusiasm of the wider community and the dedication of their multi-ethnic parishioners. Though founded by Greek immigrants, the church is proud to recognize the diversity of their church populated by Americans of Greek, Russian, Ukrainian, Serbian, Romanian, Jordanian, Lebanese, Irish, Ethiopian, and Eritrean descent. This is where the “Plus” in “Greek Fest Plus” originates: in the multiculturalism of the parish, and in the chaotic joy of sharing their heritage with family, friends, and revelers alike.

“I met my wife in Greece; she is an American from Madison. She came for two weeks [vacation], stayed nine months. After I came here, I had a fiancé visa. So I married Valentine’s Day here, 1978. In 1980, her parents came to Greece, we married in the church. I have two anniversaries – two troubles!” – Adonis Paraskevas, church member

“I remember we were there at Arcadia over the mountains. Mussolini was sending his planes down to Ethiopia, and we’d get out and watch the planes and then my dad said ‘no, there’s going to be war all over’.” He was following everything. So in 1936 we came back to St. Paul. My husband was in the service and I was friends with his sister who was a private school teacher, and I met him through her. So then I got married, came to Madison.” – Mary Margetis, church member

“I like to say that I’m ‘Irish Orthodox.’ I was born and raised on a little dairy farm and Fond du Lac County and I came to orthodoxy by choice as an adult. I was drafted into the U.S. Army and sent to Vietnam and came back convinced that that war was a terrible mistake, and embarked on a run of what could be considered a spiritual journey. I had been raised a Roman Catholic and it was common – and continues to be, I think – that as a young person… I didn’t practice any kind of religion and didn’t really feel the need to. But then I did, after the war.” – David Giffey, church member and iconographer

“When I first joined Assumption Greek Orthodox Church in the early ‘70s, Greek Fest was being held at Hoyt Park and we had to load trucks with all the food and that was cooked here at the church and transport it. And it was fun, but it was much smaller than it is now. And then it moved to Warner Park, and finally we make use of the church and Seventh Street. The neighbors allow the church to block off the street and have a street party. And it’s just wonderful. It’s a way to share so many things.” – David Giffey

“We got to make the theples as young girls. I remember being feeling so honored that I got to be the one who counted them putting them in. And as I think back now I suspect that the parents were actually counting after me to make sure I was right. But it felt like I got to move up from counting to rolling the dough, and then rolling the dough to frying the dough. It was our coming of age in the church because we don’t really have anything like that in the Greek Orthodox faith. You know, you’re baptized as a baby and our coming of age was what we got to do for Greek Fest!” – Georgiana Wilton, parish council president

“Loukoumades is the Greek version of a donut. When I was in Greece, they were making loukoumades. And when I got here, I found loukoumades!” – Vasilios Briamis, church member “This is how we all felt… My mother would say ‘Oh, Rosous (Russians), they’re Orthodox like we are.’ She said ‘Oh, the Romanians, they eat the same food like we Greeks do.’ So we knew the background, and we bonded together. I can’t even see like, you being Ukrainian, not talking to you! We have quite a few Ukrainians here; look at our priest, Father Michael. I knew his mother, then she got married and had him. Then his grandparents, the Grygorenkos, would bring him to church and we would tousle his – he had a little ‘heinie’ haircut. And now he’s serving the church!” – Mary Margetis

“We get so many phone calls and emails asking when Greek Fest Plus is, they don’t want to miss this year… Because it’s the one time they can do those dances and hear this music and have this kind of food in this kind of community. Not many festivals have to kick the people out when it’s closed, like ‘We’ve got a permit that expires now and we really have to close shop!’ And people still want to sit and talk and dance and relive memories.” – Georgiana Wilton 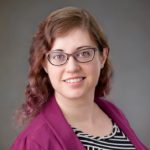 Carol Griskavich is the Community Engagement Manager at PBS Wisconsin, which means she wants to use your input to create the community events that get your Wisconsin neighbors engaged. She stays out of trouble by doing improv comedy, cooking perfectly edible meals, and accepting compliments on her glasses that people...