La Crosse’s Public Library Has Added Seeds To Its Collection

Roman orator Cicero said, “If you have a garden and library, you have everything you need.”

La Crosse librarian and avid gardener Cindy Mischnick wholeheartedly agrees. “When you think about it, that’s probably pretty true. You might want to throw a house and stove in there.  But, yeah, it’s two vital things that make for a good life,” Mischnick said.

Mischnick is living that good life and helping others find it. She was a driving force behind the La Crosse Seed Library, the state’s first that allows patrons to “check out” seeds to plant in their gardens.

“If you taste a vegetable that’s grown from an heirloom seed or is grown locally, it has no comparison for something you buy in the grocery store,” says Mischnick.

As a retired reference librarian, Mischnick sees the seed library as fitting in with what librarians do. “We collect information of all types and catalog it and make it available. It just so happens that seeds can be in that category,” Mischnick said.

La Crosse’s seed library was initially stocked by Seed Savers, the nonprofit Iowa farm that preserves heirloom plant varieties. They also provided workshops on the diverse way to save seeds.  Patrons save some seeds from the harvest to return to the library and restock the collection for the next season.

Keeping heirloom seeds in circulation helps ensure that a wide range of plant varieties survive. Seed companies once offered thousands of crops but over time companies consolidated and offered only a limited range of best sellers. The genetics of less popular species were lost. The seed library keeps more variety in circulation.

“We are keeping information then that’s really important for the planet,” says Mischnick. And when you boil it down that’s just what librarians do. It’s clearly a good fit for Mischnick.

“It’s been really, really fun,” she says. “I couldn’t ask for anything better.” 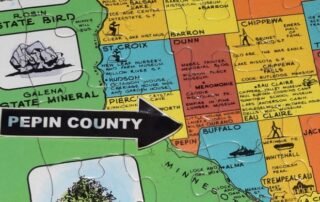 It ‘Looks Like A Square Root Symbol’: How Pepin County Got Its Shape

How To Make Methunky, The Beloved Czech ‘Sauerkraut Cookie’