After traveling around the world, German-born blacksmith artist Michael Edlinger found his place on a farm in eastern Wisconsin. The area reminded him of the rolling hills of Germany. Marsha Ralston-Edlinger always loved gardens and horses. She grew up on a family farm and is now the only one of her siblings that still farms.

Michael was living down the road and had always wanted to learn to ride horses. He asked Marsha’s son if he could exchange horseback riding lessons for help around the farm. After Marsha’s first husband was diagnosed with cancer, she became his caregiver. Teaching neighbor Michael to ride gave her a much-needed distraction from her husband’s terminal illness. After her husband passed away, her friendship with Michael grew into something more. “I thought it was really nice my first husband approved of my next husband,” says Marsha.

On the farm, Marsha had always raised beef cattle and hogs. “I also got involved in gardening, extensive gardening and I found an outlet with the restaurants in New Glarus, so I have been doing that for probably 15 years if not longer,” says Marsha. While Marsha tended to her gardens, Michael continued his blacksmithing art. He created structures Marsha used in her gardens: stone gates, gazebos, benches, and trellises.

A popular feature of the gardens is the labyrinth path where strollers will find a stone to sit on and an oak tree in the middle. A gate with “Joy” written on it, which was Marsha’s mother’s name, marks the entrance “because when people come to the Garden Stroll, they could never find the labyrinth path,” says Marsha.

Marsha and Michael host “The Garden Stroll,” a yearly fundraising event supporting charities including work in Haiti, Pine Ridge, food banks, the Habitat Build from Mount Vernon, the Rotary Club of Madison West and the Donald County Park. The event brings in 100-200 people and includes a silent auction with deserts donated from the community. “A lot of people coming together to make this possible, ’cause people from church and surrounding area bring their pies, their cookies, and everything else. It is not uncommon we sell a pie for $120. It is a lot of fun.”

When it comes to designing his art, Michael likes it to be symbolic. Among the gardens is a piece of art dedicated to victims of gun violence. “There is a monument to Sand Hook, was a long time coming, saw it on PBS, the documentary about it and I kind of said there has to be something I want to do about it. When you are doing what I am doing, you feel the need to express yourself because it is something that not exactly make you burst or anything but certainly it leads you to creativity in order to get that out of your system.”

Together with her gardens and his art, they have forged a giving space. 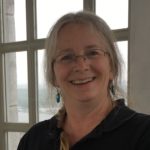 Inga Foley is a video editor for the “Wisconsin Life” project and enjoys bike riding, gardening and working on her old VW.