Thanksgiving Cobbler: Behind It Is Love, History, Legacy

This transcript has been edited for brevity and clarity.

Of course, everything is also about the crust. You got to have a crust that’s nice and flaky, that has a good taste to it, that has a little crisp to it.

The best dough recipe I have — I substitute my liquid, so instead of using water, I use orange juice.

This pan here was my grandmother’s pan, and my grandmother also did a lot of canning, so I grew up eating peach preserves, canned peaches. And I remember some nights that was our dinner. We had fried salt pork, canned peaches and homemade biscuits and syrup, and that was dinner. And we were very grateful. We didn’t know we were poor, you know.

Thanksgiving is a big holiday in my house, and I’ve had as many as 50 people at my house for Thanksgiving. Tables all over the place — tables in the dining room, tables in the kitchen, table in the basement, people sitting at card tables or TV trays.

Behind it is love, behind it is history, legacy. I am what I am in the kitchen because of Cordelia Clark, my grandmother, and Lucille Virge Tucker, my mother. You know, they came through hard times. My mother had 11 children, so she had to know how to throw something together to make a meal to feed all of us.

The most important times happen around food. … It’s an opportunity for people to come together and fellowship and talk about their day or what’s going on in their lives, and what better place to do it around the kitchen table or around a dining room table.

February 2021 marks “Wisconsin Life’s” 10th anniversary on Wisconsin Public Radio. As part of the celebration, “Wisconsin Life” contributor Cynthia Woodland reflects on why she got involved in the program in its beginning stages.

“When ‘Wisconsin Life’ kicked off 10 years ago, I got involved because I love recording other people’s stories, in their own words. It’s like opening a window into someone else’s world. I especially like highlighting voices that are seldom heard,” said Woodland.

She chose to share this Thanksgiving cobbler story, which she produced, as part of the anniversary celebration.

“One of my FAVORITE stories centered around a holiday food tradition, common in African American families,” said Woodland. “In preparation for Thanksgiving, Madison’s Carlotta Calmese invited me into her kitchen to tell the story of food, family and one of her favorite, traditional desserts — that sweet, glorious, golden, delight — PEACH COBBLER!!!” 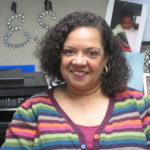 Cynthia Woodland is a development specialist at Wisconsin Public Radio.