Remington Viney, a junior at UW-Madison, has been a pilot for four years.  She’s also a member of the Badger Aviators. According to her, “the best part of flying is the view, the view of the ground, especially clouds” and that “you just can’t find it anywhere else.”

Starting in high school, Remington was encouraged to pursue aviation and her interest in flying. She joined the Wisconsin National Air National Guard in 2013.

When she was 19, she flew with her grandparents and her mom in a cross-country trip.  Running low on fuel, Remington realized that due to a mechananical problem, she could not access the second fuel tank. She didn’t have much time to think or panic. Reacting quickly, she told her passengers to stay calm and made an emergency landing in a cornfield near Beaver Dam without damaging the plane or injuring the passengers.

Remington is proud to be a female pilot and plans to continue her path in aviation. 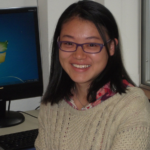 Yao Liu is the production assistant for the “Wisconsin Life” project who grew up in China and now enjoys the winter in Wisconsin.