You’re probably looking forward to spring. The birdsong. The trees leafing out and the tulips pressing through the mud. The green music of it all. I get it.

But I’ll miss winter in the upper Midwest. Not just the skiing and snowshoeing and Norwegian sweaters and the stark beauty of it all. But the way it turns me inward. Maybe it comes from that old impulse to gather close to the fire and stare quietly at the flames snapping and the logs burning down to ashes…

But when the trees are skeletal, when the windows are cataracted with ice, when the yard is shrouded white, I do my best writing. As if from the gray-bellied clouds, like snow, fall the best stories. Some of them shared with my children.

December through February, it is often dark and petrifyingly cold when my kids catch the bus down the road. So I drive them the 100 yards and we wait in the wintry gloom together. Sometimes we have five minutes, sometimes ten, and I fill the silence with stories.

There was the story of the strange staticy whispers that played from every phone and television and radio station and made all the adults go blank-faced and wander off into the woods, leaving the children behind, a twist on the Pied Piper.

There was the story about a large lump in the snow, like a massive molehill, a lump that moved, that burrowed about, that sucked down squirrels and rabbits and teachers on playground duty into a white oblivion.

Fairy tales, all of them. The town where they take place is always a shadow version of where we live, and the children who save the day are always shadow versions of my own. I speak slowly and with theatrical flair, often with no idea where the story is going. Snow feathers the windshield and wind shakes the car and my son and daughter’s eyes go wide, their faces greened by the dash lights.

The stories are serialized, sometimes going on for weeks. When I spot the long yellow coffin of the bus rolling toward us, I often rush out a cliffhanger: “And then they heard a strange noise in the woods!” Or “And then the door crashed open and a man entered the room with his face wrapped in bandages!”

They often beg me to keep going, even as the bus pulls up with its red lights flashing. “Tune in next time,” I normally say and send them off…

But the other morning, with the warm breath of spring on my face and some sadness in my voice, I said, “Tune in next winter.” 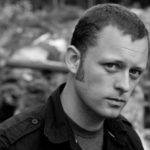 Benjamin Percy is the writer-in-residence at St. Olaf College and the author of several books, including The Dead Lands and Red Moon.