Michele:  Hi, is this the registration desk?

Whitney (at the registration desk):  Yes!

Bar patron:  This is where you buy insects….

Michele:  I’m at North Country’s Hardwood Café in Loretta, Wisconsin, about halfway between Park Falls and Hayward and I’m staring at a stack of little take-out condiment cups – each one with a wood tick inside.  I will never look at tartar sauce the same way again.

Michele:  I didn’t realize you could buy…the tick.

Whitney:  Yes, you can buy the tick for dollar and you just have to pay to register it. Racers choosing a tick to buy for the competition. (Michele Good/WPR)

Whitney:  Okay and there was one more with ya. (Turning to another racer) And your tick’s name is…?

Michele:  Where did you find them?

Doug:  Yeah, they’re all over the place.

Michele:  And, it’s much more competitive than you would expect.

Michele:  So training regimes. It’s the steroids of tick racing.

Michele:  Oh my God, so they plopped them down. Judge Tim Koback:  And they’re off.

Owner of Christine:  Do you know whose is whose?

Owner of Christine:  That is Christine.

Owner of Whalen:  She’s going back to get help.

Michele:  Christine is fast.  Named after your wife?

Owner of Christine:  Yeah, I did.

Owner of Whalen:  He hasn’t even gotten out of the circle yet.

Michele:  Oh Christine, you were so close.

Michele:  Christine’s nearly back to where she started.

Owner of Whalen:  Just get mine out of the circle.

Michele:  He’s still in the circle.

Owner of Whalen:  Just get out of the circle.

Michele:  Oh, Christine’s making her move.  Oh no, she’s going back to help Whalen.  Not sure where to go.

(CHEER and sound of tick being smashed with gavel.)

Michele:  And Whalen has been smashed.

Michele:  And there’s one dead tick.

Michele:  Oh my God, there’s a loose one.

Judge Tim Koback:  Can someone pick their winning tick up?

Michele:  These people are not in control…you don’t want to mix alcohol and ticks.  I just want to say that for the record.

Judge Tim Koback:  And they’re off…. Michele:  They said that a couple of years ago, there were like 120 [ticks]?

Michele:  Hard to wrangle that many ticks.

Larry: A dollar entry.  Winner takes all.  So you usually walk with 45-50 dollars.

Larry:  Big money in the Northwoods.  And a couple of beers, you know.

Winnie:  I mean, what else are you going to do right before the holiday weekend.  You know?  It’s always something to do, we always have fun up here.

Michele:  They certainly do.  After three and half hours racing and 42 dead ticks, Scott “Scooter” Smith of New Richmond took home the trophy with his tick, Bloodsucker. 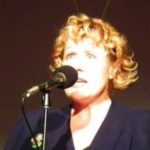 Michele Good grew up in the Northwoods and spins many plates at WPR. She’s host and executive director of Chapter A Day, a technical director on Central Time, and a director/founder of 9XM Players and Old Time Radio Drama.

A Little Slice of New England