Nicole Atkinson was already building shelves and furniture when she was just a teenager. She went on to study mechanical design and began her career at a furniture company in Oshkosh. Yet she dreamed of one day working on a project that connected her work with that of renowned architect Frank Lloyd Wright.

Her dream came true when Atkinson responded to a Facebook post looking for tour guides for the American System-Built homes designed by Wright on West Burnham Street in Milwaukee. Wright produced a catalog of standardized home models where interested buyers could choose the exterior design and floor plan, then order pre-cut lumber and all the additional components to be shipped to their building site.

There are six American System-Built houses on the Burnham block. Built in 1915 as spec houses, interested buyers could see what the final product would look like.  The smallest model, the B1, has been turned into a museum.

After learning about her woodworking background, Atkinson was invited to join the Interior Design Board and helped determine how the museum house should be furnished.  Atkinson built pieces using Wright’s 100-year-old plans and furnished the house as it would have looked in 1915.

Frank Lloyd Wright’s Burnham Block, Inc., owns five of the six houses on the street.  They are currently renovating one of the duplexes with plans to make it into an Airbnb. Atkinson is building the furniture based on Wright’s designs, but not everything will be the same size or scale as it was in Wright’s day.

“The beds are going to be queen size and twin size as opposed to what would have been the size in 1915.  And, we’re going to hide a mini-fridge inside Frank Lloyd Wright’s original drawing of an ice box,” explains Atkinson.

Atkinson builds the furniture in her basement workshop, then transports the pieces to an empty duplex next to the future Airbnb. 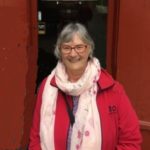 Donna Crane is an associate producer and project manager at PBS Wisconsin who loves stories, traveling, and starts her day by (usually) solving KenKen, Sudoku and crossword puzzles.