Finding stillness in the storm: Family camping in the best and worst of times

Taking the kids camping usually sounds like a great idea, until it’s not. Author BJ Hollars brings us a story about the trials and triumphs of the family camping trip.

Finding Stillness In The Storm

With those famous words, Charles Dickens opened his classic novel, which, if you read no further, might very well be a book about camping.

Ah, camping!  The foolhardiest of summer traditions!  The chance to dust off the tent, unfurl the sleeping bags, and pretend that you enjoy the outdoors.

And all the better if you actually do.

And we did, at least for a little while, as my children and I pulled into our campsite at Coon Fork Campground thirty miles east of Eau Claire.  Standing at the edge of our site, we peered out at the glistening 62-acre lake, while overhead, the birds welcomed us with song.  My eight-year-old son shimmed beneath my left arm, my six-year-old daughter took refuge beneath my right.  Together, we all inhaled a gallon-sized breath of cool, Wisconsin air.

It was the best of times, indeed.

Right up until the storm struck a few hours later, sending us speeding back to the comforts of our home.  Warm beds never felt so good.

Returning to our site the following morning, I was relieved to find that the weather gods had taken pity on us.  Our tent had not become a houseboat as I’d feared, merely a waterbed.  No matter.  It was nothing ten absorbent towels couldn’t fix.

Our return to Coon Fork the morning following the storm came with an added challenge: our nine-month-old baby, who was destined to enjoy her first day of camping while my wife went off to work.  Perhaps “enjoy” is too strong a word.  Maybe “endure” is more accurate.

Which she did, suffering little more than a forehead scrape after a topple from the cooler while Daddy extinguished an unplanned cook stove fire that had scorched our lunch.

When my wife and the puppy pulled into our campsite at day’s end, she witnessed a scene pulled not from the pages of Dickens, but William Golding’s Lord of the Flies.  We were scraped, sunburned, hungry, tired, and trapped in a soggy tent.

Sometime after midnight, I woke to the sound of my wife searching frantically in the dark for a diaper.

We searched by cell phone glow as the baby’s discomfort grew.

“I think one’s in the van,” my wife whispered.  Untangling myself from my sleeping bag, I high stepped over the snoozing puppy, tripped on the lip of the tent, had a run in with some overly confident raccoons, and at last retrieved the diaper as directed.  Then I reversed course—past those raccoons, over the tent lip, and atop that snoozing puppy.  Proudly, I handed the diaper to my wife.

“And the wipes?” she asked. 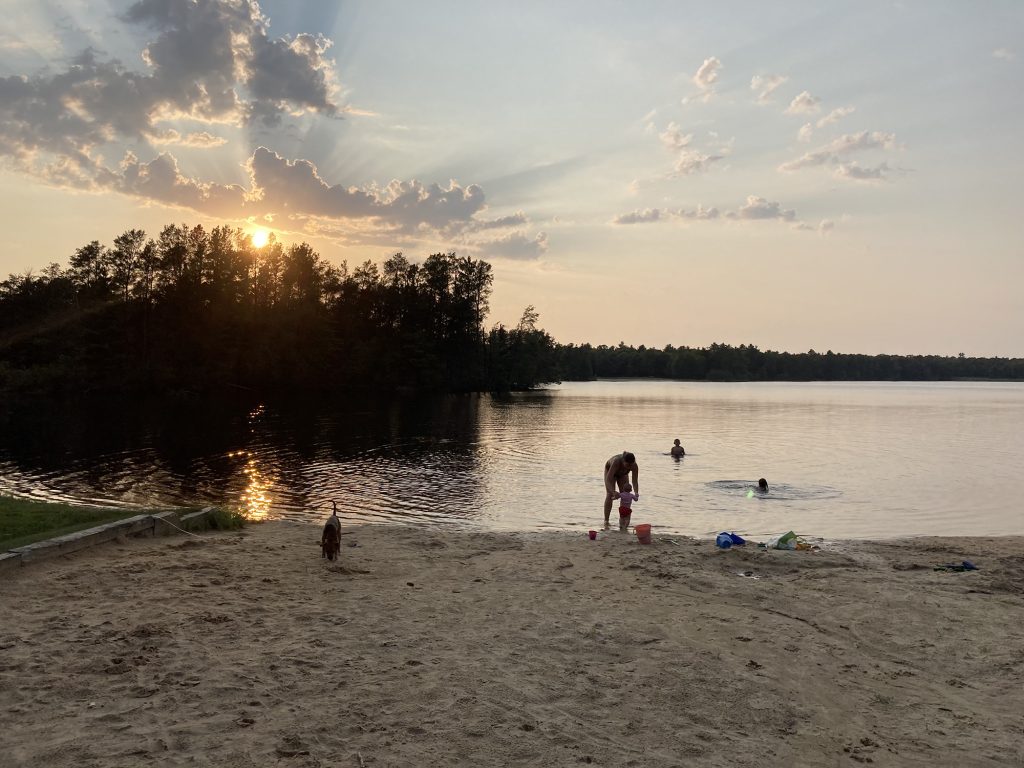 After that second trip to the van I lingered, on the edge of that star-filled lake stretched before me, listening to the nighttime serenade from insects I probably couldn’t name.

It wasn’t the sound, but the stillness, that stays with me.  A stillness that seemed to neutralize the many mishaps that had compounded throughout the day.

I took in one last gallon-sized breath before returning to the tent, where, upon entering, I saw my entire world snoozing safely together—a pile of legs, arms, and stuffed animals all woven together.

I reached for my sleeping bag, only to find that the puppy had since commandeered it as his own.

Finding a spot on the tent’s damp floor, I reached for a towel, closed my eyes, and took my place in the pile.

It was, the best of times, indeed.

BJ Hollars is a writer, author, and an assistant professor of creative writing at the University of Wisconsin-Eau Claire.