Walking into Jerry Butler’s Sun Prairie art studio, color ushers through the space like kinetic energy bouncing through the air. Visitors are transported into the inner workings of his multimedia practice. His studio showcases his recent and early work, each piece weaving together the tapestry of his 50-year art career.

Hand-dyed fabric hangs on a clothing wire and boasts large-scale lemon yellow and berry blue prints. In the middle of his studio, Butler works on a painting scaled to become a mural in Maryland.

Born and raised in Mississippi, Butler came of age when Black artists were excluded from art education’s curricula.

“Since I was a kid, I was sure that I would be the first world renowned Black artist. [What] Professor High’s class did for me [was expose] my psyche to Black artists,” Butler said.

Butler realized that he would not be the first Black artist. Instead, upon his MFA graduation, Butler immersed himself into the multi-century tradition of Black visual artists creating work representative of the Black American experience.

As an artist entering the art-making tradition in the late-20th century, Butler had the unique opportunity to be a part of the inaugural generation of Black artists who could list their occupation as an artist — something many of his African American artist predecessors were unable to do from the art world’s racist, exclusionary practices.

Prominently, Butler’s art reflects his keenness to honor those who paved the way for him. His early work included portraits of Malcolm X and Angela Davis, which warranted mixed responses from peers and professors. Shifting gears to create work received more generously, Butler utilized abstraction to subvert visual expectations around Blackness and continue conversations about the Black American experience.

“My responsibility as an artist is to tell the truth,” Butler remarks.

Since the early 1970s, Butler’s had a dynamic career. He’s exhibited work in solo and group shows. He’s written and illustrated children’s books. Umoja Magazine, the oldest African American-owned magazine in Wisconsin, commissioned him for a myriad of magazine covers. As a muralist, he intentionally ensures that his collaborators come from diverse backgrounds.

Now, at 75, his practice has evolved, but his devotion to uplifting the community through his work remains integral to his art.

“When I was growing up, I was a nobody. Somebody told me I was somebody. Now I feel that I have to illustrate and talk about the bravery of everyday people,” Butler said. 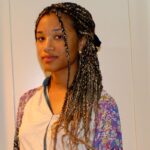 Sophia Abrams was a Developmental Project Assistant for “Wisconsin Life.” Currently based in Minneapolis, she is a writer, curator, and filmmaker.