Writer Jill Sisson Quinn and her son had a summer routine. They would go to their local lake for a chilly, early morning swim almost every day. But last summer, they tried somewhere new. The experience opened Quinn’s eyes to the joys of both new and old loves.

My go-to lake is Sunset in Portage County, a few minutes from my home. When my son was an infant, I planted his feet in its warm sand. I pushed him on the swing while he alternately dozed and watched green darners, belted kingfishers and bald eagles. Even as, over the years, Sunset’s water level rose, swallowing the beach, engulfing the swing set, and turning the picnic tables into strange diving platforms, we continued our near daily summer visits.  They began in late May, when I’d return from my morning walk to my son waiting on the porch in his swim trunks. We’d arrive at Sunset before 8 a.m., alone but for one older couple who braved the icy water with us. 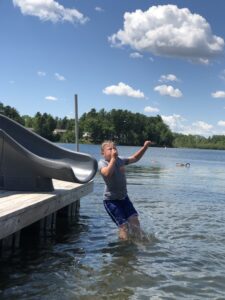 But last summer, I cheated on Sunset. I enrolled my son in swimming lessons at Waupaca County’s Shadow Lake, a farther drive to a more populated area. Shadow seemed a little less wild, with its waterslides, lifeguards, freeze pops and flushable toilets. The water was more shallow and warm; folks warned by summer’s end there might be lots of goose poop. Cars ran visibly along a fairly busy road on the lake’s Western side. Because of this, I assumed there was a dam somewhere and the lake was man-made.

Gradually, we fell in love with Shadow. I watched the teenaged swim instructors progress from organizing games of hula-hoop tag to teaching my son the crawl. They showed him how to give himself over to the water, how a quick turn of the head, an in-breath, is all he really needs of the landed environment.  There is something so right about watching higher schoolers teach younger kids. A friend once summed it up for me: teenagers so need to be loved, and children so love teenagers.

We didn’t visit Sunset for weeks. My son found a lost beach ball in the wetlands east of Shadow, and thus began pick-up games of soccer before lessons. After class, he would play on the raft and the slide with whoever was there — girls and boys alike, of varying ages, who barely knew each other’s names, brought together by this lake.

Some pretty natural things can happen at an unnatural lake, I left thinking one day, musing about my shifting love from Sunset to Shadow. But Shadow Lake, is not man made. Like Sunset, it formed in a kettle depression left by the retreat of the last glacier, where a huge chunk of ice gradually melted in the newly-laid sediment. The lakes’ only difference is how they get their water. A hard water seepage lake, Sunset’s water comes mainly from groundwater.  A drainage lake, Shadow has both an outlet and inlet, and receives water from precipitation, runoff, and another nearby lake. 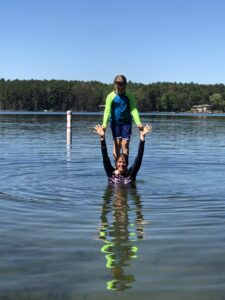 Both lakes have had humans’ hands in them, and suffered (and benefitted) from our constant remodeling of the environment. Shadow Lake has had its channels renovated. Sunset has endured chemicals to kill off its entire fish population to be replaced with more “desirable” species. This reminds me that categories exist mostly in the mind – natural, man-made, seepage, drainage – the lines between them blurry. Nothing is pure. Passions can shift, and our preconceived ideas about one thing over another only limit our experience.

After his final lesson, my son and I returned to Sunset Lake and that original bond flooded through me like a dream of one’s first love from which you wake thinking, still, this many years later, that was the one. And Sunset seemed to forgive our fickleness. That day, unassisted for the first time, my son would swim all the way out to Sunset’s buoy, no life jacket or inner tube or hand held by a parent, no lifeguards watching nearby, just him and the water and desire –and for that, I cannot deny, I have to thank Shadow.