On any given weekend, bargain hunters, treasure seekers, and curious consumers are lured into one of the many flea markets in Wisconsin. The bazaars also attract a diverse group of sellers and vendors. One of them is Paul Wiegel. He gets up early to take us to the Princeton Flea Market in central Wisconsin.

The cars begin lining up hours before sunrise. Every ten minutes or so, a pair of headlights passes by the first car in line and takes its place at the end. They wind around the boundary of the gravel parking lot until the line turns back on itself and forms a giant question mark forty cars long. As usual, my car is near the end of this line. Once again I’ve arrived a bit later than I planned, but I still have faith in the day’s prospects.

This line of hopefuls is full of flea market vendors. Each Saturday from late April until mid October, the Princeton Flea Market starts early. Before most of the first customers are even brewing coffee, the vendors are already there, waiting. The ones who have season-long spots are also waiting, but their spot is guaranteed. The remaining spots are for people like me–the ones who have shown up just for the day. My role in this market is a bit different. I haul out a 1957 Smith Corona manual typewriter and offer on demand poetry typed on the spot. I ride the line somewhere between street performer, sketch artist, and therapist. And on some Saturdays, the sensory mix of clacking keys, mini doughnuts, and summer sun combine for a perfect experience.

As the line of cars begins to move toward the market grounds, Mike, the flea market’s ringmaster for the past thirty-five years, comes to your car’s window, scrutinizes the market’s map like an modern-day cartographer, and assigns a spot. It’s not exactly a treasure map, but while he calculates the number of vendors and the number of spaces, you feel something akin to discovery.  Soon, everyone will be in City Park, driving right up to their spots and unloading whatever they will be pushing that day: wooden lawn decor, used tires, cookies, spices, things that may or may not pass for antiques, paintings, books, jewelry, dresses, and tools. The variety of stuff is worth the price of admission (which is zero). To be sure, a lot of it would be classified as junk, but of course this is always subjective.

Canopies pop up like flowers as the sun clears the trees on the east side of the park. By 6:30, some vendors are completely set up while others continue to spread their wares on folding tables or line them up right on the ground. There are hello’s and brief visits among the regulars, and introductions with new people. There’s advice about set up and positioning of product. There’s free coffee at the food building in the park’s center.

There’s camaraderie here, too, but it’s balanced with capitalism. For some, this is a side hustle, but for others this is food on the table, rent, a car payment. Everyone here has that feeling of opportunity born of ambition. No bosses and no quotas. The first buyers arrive by 7 AM–the regulars–moving quickly and looking to strike first. By 9 AM, the place is hopping. On a holiday weekend, thousands of people troll the grounds. They pick things up, ask if the price is negotiable, haggle, debate, and decide to come back later. Parking stretches away for blocks. The old timers talk about the shuttle that used to run to-and-from a distant lot.

By noon, the crowd thins, and slowly the canopies fold in on themselves and are packed away. First one car leaves, then another. I decide to pack up as well. It’s time for lunch, and most vendors have already logged eight hours. There’s a “leave no trace” feeling here by mid-afternoon that is a cousin to the Burning Man Festival.

This open air market has deep roots of commerce. They stretch back to ancient bazaars and centers of trade. Highway 23 passes through Princeton going east-west. It’s no silk road, but it carries a similar promise–you never know what you might find along the way. 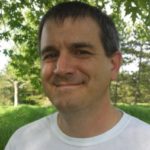 Paul Wiegel has a “day job” as a teacher and lives in Berlin, Wisconsin. He’s also a writer who occasionally works as a street performer typing on-demand poems with Fox River Poetry Company at festivals and markets around Wisconsin.