When the temperatures drop and the snow flies in Kewaskum, most people hunker down. For Jason Wood and Danny Dorn, it’s a signal to get busy orchestrating a symphony of snow-making machines, water hoses and personnel to groom Sunburst Winter Sports Park.

On this night, the temperature is 18 degrees and dropping, making it perfect snow making weather. By morning, there could be piles 15 feet high of new snow. Wood oversees the entire operation, working long into the night to maximize the snow making. The colder the temperatures get, the faster the problems can happen. Wood says, “It’s typical of almost every time snow making, something goes down. Something doesn’t go the way it’s supposed to.” Tonight, it’s a bad valve. Last night, a broken compressor.

The snow-making machines freeze up quickly in this weather and Wood uses a blow torch to thaw the nozzles. It quickly goes from bad to worse when a water hose comes loose dousing Wood in a cascade of cold water. “I managed to take a good shower. When the hose blew off, it blew off right in my face. I am wet all the way through. My gloves are drenched inside. It gets frosty and that is just all there is to it,” says Wood.

About an hour later, a valve gets stuck once again showering Wood with a blast of cold water and turning him into a virtual ice cube. “It’s part of the game. It’s part of the job and yes, it’s cold. We go through a lot of people who want to be snow makers,” Wood says. And he still has several hours to go before his night is done.

Donny Dorn started at Sunburst right out of high school in 1975 working the ski lifts. Now, 46 years and three owners later, he’s still at it. These days you’ll find him driving the big rig to groom all the snow Wood and his crew made the night before. Dorn says, “I like driving equipment. I never get sick of driving equipment.” And he’s happy to show off the Piston Bully groomer imported from Germany. The new snow will get groomed between two and three times before it’s ready for the public.

One of the most unique features at Sunburst is the tubing hill because of the way the sliding lanes are groomed. To make all the tubing lanes from scratch takes between 10 and 12 hours. Dorn says, “The hardest part is to drive straight for 900 feet. When you’re going so slow, it’s quite hard. When both hills are open, there’s 50lanes.”

With a grin on his face Dorn tells a story of when the tubing hills first opened, the Washington County Sheriff’s Department sat in the parking lot with their radar gun and they clocked him tubing down the hill at 30 miles an hour. Dorn adds, “That’s pretty fast here considering your face is only about 10 inches from the snow. So ya, that’s fast.” 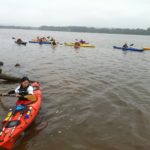