The music world has blessed us with some gems about the Milwaukee Brewers. In light of the team’s success and playoff appearance this season, a few new songs have popped up honoring the Crew…like “Christian Yelich” by the Milwaukee the hip-hop collective Hiii Tribe.

And of course there are some songs that fans have deemed classics. Who can forget the 1980s crowd rouser, “Brewer Fever?” Another classic Brewers anthem is “Turnin’ Up the Heat.” It was written in 1985 by Wauwatosa music composer and jingle writer, Terry Sweet. WPR’s Maureen McCollum recently talked about the song’s history with him.

Maureen McCollum: You wrote the song, “Turnin’ Up the Heat” in the mid-1980s. The 45 records were printed in 1985. So, who commissioned you to write this song and why did you write it?

Terry Sweet: Well, the Brewers were really, really hot in the middle 80s. You might remember they went to the World Series in 1982.

The vice president of [Brewers] marketing, Dick Hackett, called me. He knew that I was the guy that a lot of advertisers came to to write jingles. And so he called me up and asked me to come in. They wanted me to write a song for the Brewers. They didn’t have a theme line or anything, so I just had a wide-open slate. And so it was like, “OK, just go make us a song.”

MM: Were you a Brewers fan at the time?

MM: So what was it like to be contacted by this team that you love? MM: And what exactly was the song used for?

TS: Well, they used it in a number of ways. They made a bunch of copies of it. At the time, I think they made records, 45s, and they made cassettes. They sold copies. In the 1980s, they used it in the stadium. They used it really as a jingle behind radio and TV spots. They used the instrumental version of it to talk over. All those kinds of uses.

MM: So what was it like the first time that you heard your song played at County Stadium?

TS: (Laughs) I was really excited. I was pumped. You know, the people there, of course, had never heard the song. So they were just kind of listening to it. It was cool for me to hear it coming out of the big speakers at the stadium. That’s a very exciting experience.

MM: Do you remember how fans responded to this song after it was released? Did they “clap their hands and stomp their feet?”

TS: I think they did! Yeah, I think once they once they understood that’s what [the song] was saying. You know, the way I recorded the song kind of cued them to clap their hands and stamp their feet. I think a lot of them did.

TS: After I was given the assignment, I went into my studio and sat at my piano. In a sense, I was really a good person for them to write it because I was such a rabid fan. I could really write it with that kind of personal involvement perspective.

I knew I wanted to do something pretty rock and just a little bit raucous. I couldn’t go too crazy, of course, because it has to appeal to a very wide demographic audience. But I wanted to rock it as hard as I could within those parameters.

I was really looking for just that sense of energy and excitement that you get [with the Brewers]. You know, I remember watching some of those playoff games and when the Brewers had that long winning streak. With every pitch, everybody in the stadium was on their feet. And I was there for that. And that’s the level of excitement that I wanted to put into the song.

TS: It just came to me, really. There was nothing else to it.

I was just trying to build that level of excitement and the phrase just came to be. Keep turning and keep pushing, pushing. You know, it’s that competitive spirit. I think that’s really what I was going for there.

MM: One of my favorite lines is, “The Brewers are brewin’ up a barrel of fun.” It’s a really great play on the scene at County Stadium at the time and also a nod to the brewing culture in Milwaukee. Was that your thought behind that?

TS: Yeah that was exactly my thought process.

We have some alliteration there: “Brewers are brewin’ up a barrel of fun.” You know when it comes down to it, that’s really what it’s all about is fun. It’s fun to go to a Brewers game and experience the stadium excitement. Watching the game live is a completely different experience than watching it on TV. For the “brewin’ up…” that was just a cutesy little play on words there.

MM: With the, “We clap our hands and stomp our feet” line, I’m wondering if that was a throwback to another famous and beloved Brewers song, “Brewer Fever.” They say, “Stomp your feet and clap your hands.” Was that intentional?

TS: No, it wasn’t intentional. I wasn’t trying to relate anything back to that.

I was just thinking about the tension when you have a very important game. The stands are full and every pitch is more important than the last one. People will stand there and they will stomp their feet and they’ll obviously clap their hands. Other than shouting or cheering, those are the two ways that fans can express themselves in the stadium.

MM: Who are the other musicians on this recording?

TS: It’s studio people. People that typically sing on jingles and play on recordings. There’s a group of people that can do really high-level studio work and that’s who’s on it. I think the band did a good job playing on it.

MM: Do you remember who the lead singer is?

MM: You talked about this before, but I also love how joyful and interactive this song is. It really encapsulates the feeling of being at County Stadium and Miller Park. But it’s also one of those songs that can get stuck in your head and impossible to get out.

MM: Is that intentional?

TS: Of course! I’m a jingle writer. That’s what I do. I torture people.

MM: Is that a jingle writer tactic? To create earworms?

TS: Well yeah, that’s exactly what a jingle is about. Every time a jingle goes through your mind, that’s a free commercial for that advertiser. That’s an impression. If they heard a radio spot on the air, that’s one impression right there. But if they get out of the car and they’re walking up to the house and that song plays again in their mind, that’s a second impression. Only the advertiser got that one for free. If that thing plays in your head 50 times that day, that’s 50 impressions they got for free.

MM: Is there a secret formula to that?

You need to be able to craft a simple melody with the most important information together. If you think about (singing) “A B C D E F G…” In my mind, that was the original jingle. How many people in America learned the alphabet by singing that song? Right there you have information tied to melody and it sticks in people’s minds.

MM: There are other Brewers songs out there. We talked about “Brewer Fever.” There’s “Talkin’ Baseball.” There are some new songs that have come out this year. Do you have a favorite Brewers song besides “Turnin’ Up the Heat?”

TS: (Laughing) This is my favorite Brewers song.

MM: It’s my favorite Brewers song too, so that’s all right (laughing). So, the Brewers may or may not be heading to the World Series this year. What has this moment meant to you, not only as a Brewers fan but as someone who has written this song that a lot of people are playing right now?

First of all, I’m just really glad the song has had this resurgence with the success of the team this year. And I don’t think this is my imagination but when the team reaches this level of success, I really feel a sense of community connection. I feel like everybody in Wisconsin is kind of vibrating on the same level. To be and to play any part in that- and mine is a small part but at least it’s some part- I feel kind of connected with that whole that whole vibe. It’s a very cool feeling.

MM: What are your predictions on how the Brewers will do in the NLCS?

TS: I still think we’re going all the way.

MM: If they make the World Series, what are your plans?

MM: I vote that you figure out a way to perform the song at Miller Park.

TS: I think that’s a pretty good suggestion. Why not? (Laughing) Maybe I’ll look into that. Front of vinyl sleeve for “Turnin’ Up The Heat.” (Photo from Discogs) Back of vinyl sleeve for “Turnin’ Up The Heat.” (Photo from Discogs) 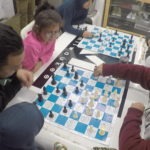 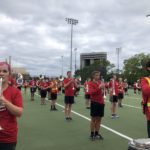