As summer comes to an end, tourists begin to leave Wisconsin’s northwoods. Every year on Labor Day, people line Highway 51 and wave to the tourists as they head home.

These “wave parties” are a way of saying “thanks for coming,” but also, “thanks for leaving.”

At Whitman’s Bar and Grill in Hazelhurst, people are gathered to eat grilled corn, hear live music and wave at the cars headed south.

“We are the original,” said bar owner Mary Whitman. “We started this before the other people ever did it.”

This year marks the 48th annual wave party at Whitman’s.

“It’s a customer appreciation party, but it’s also a goodbye to summer,” Whitman said. “Thanking our friends from the south that come up and support us, waving to them, saying thank you, come back next year, honk if you had fun.”

Rick Stark has a place up north, but lives in Appleton. Before heading home, he stopped at Whitman’s wave party for the first time. Sitting in a lawn chair in the parking lot facing Highway 51, he waves as the cars drive south.

“We’re just telling them how great it was for them to share their time with us, but we’re also happy to see they’re going to leave us alone for a while,” he said. Freddy Tansley from Barrington, Illinois spends a lot of time at his cabin not far from Whitman’s.

“I enjoy saying bye-bye to the people because I don’t have to go home,” he said, adding that he likes not having to make a reservation at local restaurants when the tourists leave.

“But without the tourists who come up then we wouldn’t have the good restaurants and everything,” said his daughter Sarah Tansley, who lives in Chicago. Melanie Cockrum and her cousin Barbi Carlson at a wave party in Arbor Vitae, Wisconsin. (Photo by Marc Reisner)

Some wave parties are held in people’s yards and driveways. In Arbor Vitae, Wisconsin, Barbi Carlson set up a party for her friends and family. There’s a table of food and a refrigerator full of beer in her garage, and her driveway is decorated with balloons and signs.

Though some are happy to see the tourists go, Carlson’s wave party is completely sincere.

“I clean houses for a living, so my income’s pretty much cut in half when they leave, so I appreciate them being here” she said. “This is nice, friends get together and wave and we’re very grateful.” 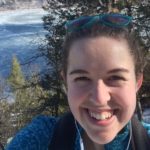 Bridgit Bowden is the special projects reporter at Wisconsin Public Radio. Born and raised in the south, she is adjusting well to Wisconsin’s cold and dark winters.