A sedated Kristi the wolf with Kristi, Linda, and Alan Pils. (Photo courtesy of Chuck Pils)

It’s peak summer vacation season for many people across Wisconsin. Some families are creatures of habit, returning to the same place year after year. Others like to dive into new experiences. Chuck Pils reflects on a particular vacation that gave his family a once in a lifetime encounter.

My 33-year career as a wildlife biologist for the Department of Natural Resources allowed me to see many types of Wisconsin wildlife up close. One of my jobs was as a furbearer biologist, which allowed me to work on a host of issues related to furbearing mammals such as beavers, foxes, and wolves.

In the early 1980s, our wolf population was down. We estimated there were only about 30 gray wolves in all of Wisconsin. Compare that to the 1830s before Europeans settled here, when 3000-5000 wolves lived throughout the state.  My friend, Dick Thiel, worked as a DNR wolf specialist in the eaarly 1980s; he’d been prodding the DNR for years to do more research about their habits and range. During the summer of 1982, Dick was working in northwest Wisconsin to radio-tag wolves.

I’d planned a vacation with my wife, Linda, and our two kids, Alan and Kristi, near Barnes in Bayfield County. I knew that Dick would be trapping wolves in the same area and asked if my family could tag along as he checked his wolf traps.

That morning we were in luck.

Checking the trap, we discovered a female wolf.  Dick carefully loaded up a pole-syringe loaded with just the right amount of sedative to put the wolf down for a short period. Our family watched intently as Dick slowly approached the trapped female. He gave her a gentle jab and slowly retreated while the sedative took effect. When she was tranquilized, Dick gingerly removed the trap.  They weighed her, took a blood sample, and riveted a sturdy radio collar around her neck.

That’s when the best part of our kids’ adventure happened; they looked in the wolf’s mouth and felt its fur, visually checking out this rare mammal at close range. We took pictures with the tranquilized wolf. I reminded the kids how lucky they were to see, touch, and experience such a rare animal like the gray wolf. They eagerly nodded their heads in agreement.

Then Dick came up with the suggestion that put a great finish to our adventure.

“Let’s name this wolf Kristi!” I heard no objections from my family, especially from my daughter, Kristi.

We all waited several minutes for Kristi – the wolf Kristi – to wake up……finally she groggily awoke and slowly trotted off into the brush.

Dick radio-tracked Kristi for 305 days and gathered a lot of useful information on wolf movements, habitat use, and home range.

Since this summer day in 1982, gray wolves have greatly expanded their statewide range and now total more than 200 packs; A remarkable wildlife success story.

The images that I took of my family with Kristi the wolf have been a source of conversation for many years. They bring back memories that our Kristi will always remember. 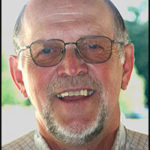