A Centuries Old Form of Bell Ringing Comes to Wisconsin

The little known art of change ringing datesback to the 1600s. It originated in England but is now found all over the world.

Change ringing is coordinated performance. A group of people ring a set of tuned bells through a series of changing sequences determined by math and executed according to precisely learned patterns.

Ringers usually stand in circle, each behind a rope. The person ringing the lightest bell, called the Treble, calls, “Look to!” This is the traditional sign that the sequence is about to begin. As she starts her pull, calling “Treble’s going!”, and then, as the bell swings downward, “She’s gone!” Each other bell is then pulled in rapid succession. It’s an art that requires teamwork for all of the bells to sound exactly when and where they should. There’s no music or written score. Everyone memorizes the patterns.

Producer Adam Hirsch went out to learn more about this mathematical art from a lifelong Wisconsin resident and change ringing enthusiast. 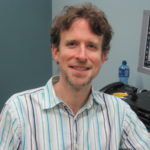 Adam Hirsch is a journalist and freelancer in Madison.