Kim Hunter, owner of target grazing company The Green Goats, is in a field in Browntown, Wisconsin, with her goats. Hunter takes her herd of goats to properties where the goats graze and cull vegetation for property owners. The method is often chosen because it’s more environmentally friendly. (Andrea Anderson/WPR)

While the idea of using goats to cull vegetation on property may sound out of this world for some, it’s a full-time job for others.

On a recent sunny day, a herd of Spanish goats that are quite possibly the cutest weed killers of all time took to a pasture in the village of Browntown in Green County with their owner, Kim Hunter.

Hunter has owned the target grazing business The Green Goats for 10 years and is based in Browntown where she lives. It’s here where as many as 130 goats can be seen sunbathing and relaxing on their days off of grazing throughout the state.

Hunter, originally from Illinois, rents out her herd of goats to eat weeds and brush with the goal of restoring the land to, as she says, “its native glory.”

Goats are natural browsers and love to climb, Hunter said.

Goats standing up on their hind legs eating is a common sight when goats are clearing vegetation. Some of the large males in Hunter’s herd reach about six and a half feet high on their rear legs.

It’s also not unusual to see the goats climb their way onto tree limbs and use their weight to cause a nimble branch to curve – pushing food within reach of the goats on the ground.

“They really do pretty nice work,” Hunter said. “They do what I call park things out. They trim all the lower branches off the trees in the yard so that I can walk through, they’re all six feet high just cut even, and it looks like I had a bunch of landscapers. Well, I did have a bunch of landscapers in there, it’s just that they’re the four-footed variety not the two-legged variety with chainsaws.”

Goats’ love for food is another reason they are a great option to clear hills, valleys and hard-to-reach places like between bee hives at bee farms or between solar panels.

“It’s entertaining to watch goats eat because they enjoy it so much,” Hunter said. “I mean they take food enjoyment to a new level. They’re very, very greedy which is what makes them good for target grazing.”

The Green Goats have had jobs at lake homes, homes in urban areas, farms, a hospice facility, and other businesses, Hunter said. They are even clearing land at Alliant Energy’s power plant in the town of Beloit.

The size of the property that needs to be cleared determines how many goats Hunter loads in her trailer and brings to the job, and how many days and nights the goats are there. Goats that are part of the grazing company, The Green Goats, behind the fence in Browntown, Wisconsin. (Andrea Anderson/WPR)

Because goats love to roam when they eat, Hunter puts up a fence before the goats can start their work. Once the goats clear that pocket of land, the fence is removed and placed around the next section the goats are to graze. If the goats were turned loose, they’d take a bite here and there and may never get back to the targeted plant, Hunter said.

Goats will eat the vegetation during a graze and then it will grow back – that’s when the goats come back.

There are several strategies for using goats to clear property in need of weed control, Hunter explained.

“As long as it’s done frequently enough it makes a difference,” she said.

Most of Hunters clients choose to use goats because they are concerned about the damage invasive plants are doing to wildlife and their property and want to get rid of the weeds in an environmentally friendly manner. They don’t want weed killer to be used because they have children or pets, or are concerned about the chemicals running off into the water or harming other animals.

“I’ve been hired by beekeepers to graze around the hives because the lawn mowers and the weed killers would be very bad for the bees,” Hunter said. “But the goats can sneak in and out and not get stung… Along stream banks. Around water retention. You do not want to be spraying chemicals around that stuff because it gets into the water and then it’s in the groundwater and the surface water, it gets everywhere. Most weed killers kill aquatic life. You’ll lose your little frogs and everything.”

But at the end of the job, Hunter says there is another side to the business, too: “There is more to it than just clearing land. People really enjoy the animals themselves.” Goats that are part of the target grazing company, The Green Goats, eat plants in a field in Browntown, Wisconsin. Kim Hunter, owner of the business, takes her herd of goats to properties where the goats graze and cull vegetation for property owners. (Andrea Anderson/WPR) 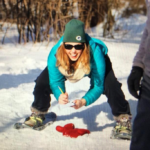 Andrea Anderson is a digital news editor for Wisconsin Public Radio. She is a transplant from Minneapolis, but her allegiance is to the Green Bay Packers. In her free time, Andrea takes advantage of the beautiful outdoors. She loves tacos and winter.