Advice columnist Ann Landers, right, and her twin sister Pauline, who also wrote an advice column as Dear Abby, are shown in a photo from June 1986, at their 50th high school reunion in Sioux City, Iowa. (AP Photo/John Gaps III)

Legendary advice columnists Ann Landers and Abigail Van Buren dished out wise and witty advice to millions of readers for more than half a century. The two were also twins — and sometimes bitter rivals. But before they were famous, they lived in Eau Claire, Wisconsin for more than a decade. Writer Dean Robbins brings you the story of the sisters who, perhaps, could have used some advice themselves. 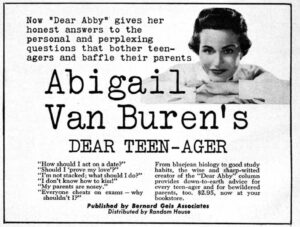 Advertisement for Abigail Van Buren’s book of advice for teenagers. (Courtesy of Flickr)

Ann Landers and Abigail Van Buren were America’s leading advice columnists from the 1950s into the 21st century. Dear Abby was the world’s most widely syndicated newspaper column, with 110 million readers. Ask Ann Landers wasn’t far behind with 90 million. Each writer solved other people’s problems, answering letters with homespun wisdom. However, their own problems — with each other — proved harder to solve. Ann and Abby became bitter professional rivals, but once upon a time they were inseparable twin sisters, raising families a mile away from each other in Eau Claire, Wisconsin.

Born Pauline and Eppie Friedman in Sioux City, Iowa in 1918, they grew up doing everything together. They even had a double wedding in identical dresses and veils. 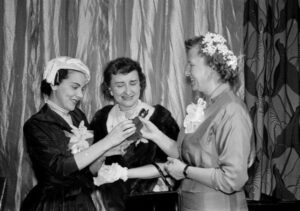 Advice columnist Ann Landers (left) is shown with two writers who received awards at the Ladies of the Press breakfast in 1959. (Courtesy of Wisconsin Historical Society)

In the 1940s, the twins moved to Eau Claire, where both of their husbands had jobs at the National Presto appliance company. Pauline and Eppie cut glamorous figures in their new community. They hosted elaborate parties, volunteered for local charities, and led parades in a Cadillac convertible. They also loved to watch the Eau Claire Bears baseball team at Carson Park, turning heads with their lacquered hairstyles.

But by the end of their decade in Eau Claire, cracks appeared in the sisters’ relationship. Pauline and her millionaire husband lived in a stately two-story, while Eppie and her poorer husband had a small two-bedroom that Pauline dubbed “Peanut Place.” They even began trading insults about each other’s daughters.

The stage was set for a blowup, and it happened shortly after the twins left Eau Claire in 1954. First, Eppie took over the Ann Landers advice column at the Chicago Sun-Times. A mere three months later, Pauline jumped into the advice biz herself, starting Dear Abby under the pen name Abigail Van Buren at the San Francisco Chronicle. Eppie saw it as a hostile gesture, and the sisters stopped speaking.

In 1958, a Life magazine article gave them a national platform for their quarrel.

“She wanted to be the first violin in the school orchestra,” Pauline sneered, “but I was.”

Eppie retorted, “She’s just like a kid who beats a dog until somebody looks, and then starts petting it.”

Ouch. The magazine declared it “the most feverish female feud since Elizabeth sent Mary, Queen of Scots to the chopping block.”

Eppie died in 2002 and Pauline in 2013, concluding the saga of Ann Landers versus Abigail Van Buren. You have to wonder if, at the end of their lives, they pined for the innocent pleasures of Eau Claire. Yes, both had become wildly successful since their time in Wisconsin, hailed as America’s most influential women. But would they have traded all that to be back in Carson Park, arm in arm, blissfully cheering the Bears baseball team?