Everyone is Irish on St. Patrick’s Day

Everyone’s Irish on St. Patrick’s Day, they say. Writer Shauna Singh Baldwin married an Irishman and discovered her own bit of Irishness at Milwaukee’s annual parade.

If I knew more Canadian women of Indian origin married to American men of Irish origin, I might ask why my husband David has never felt a burning desire to take me to Milwaukee’s annual St. Patrick’s Day parade. He needs to attend Irishfest every year, and we’ve visited relatives in Ireland. His American accent gives way to Irish whenever he says “not at ahl.” Finally, he gave way to my entreaties.

He selected his best Kelly green shirt, and I wore a green chiffon sequined-embroidered chunni to drape around my neck on a sunny but cold Saturday in March. And we joined the crowd waving and cheering as floats, cars and bands made the turn from  Juneau Avenue to flow past the Water Street bars.

“Bless you!” said a huge smiley man in a white surplice bordered in gold. Mitre in one hand, he folded David into a bear hug and said all his sins were forgiven. I thought he was dressed as the Pope, but David said he was St. Patrick, which made the forgiveness more fun. St. Patrick, I’m told, charmed the snakes out of Ireland. I grew up respecting snakes as protective rather than ignoble creatures that can trick women into errant apple-eating, so I’ve never been sure he was wise.

Mr. St. Patrick posed for photos with a green body-suited leprechaun, and reached up to shake hands with a stilt walker in a tall green hat. When a classic car with a car dealer’s ad appeared, he confessed to being a parishioner of said dealership. Smiley auburn-ringletted girls – and a few young lads – from what must be twenty troupes of Irish dancers in this city stopped to jig for him. Their rigid unmoving arms are symbolic of resistance to their British colonizers – a fact my Indian grandparents would understand and greatly appreciate.

Seagulls circled and pounced for discarded hot dog buns. We made our way up Water Street the better to hear the bagpipers. I overheard someone say, “I’m calling in sick on Monday.”

Over the music, a woman beside me in the crowd asked where had I bought my green sequined chunni? I said, “on a trip to Pakistan.” And made my usual joke: I’m IBM – Irish by Marriage. “Oh, we’re all Irish today,” she said, and turned back to the parade.

After the bagpipers came members of a Scotch Irish troupe, brandishing swords and stomping along in kilts. Three waitresses with shamrocks painted on their cheeks spoke Spanish as they poured green beer from a barrel.  Along came two African-American women carrying a banner advertising Celtic Traditions. David and I posed for a photo at Duke’s Bar, so we could send it to my turbaned Uncle Duke in India. As we walked up Yankee Hill back to our car, David pointed out an Irish flag, noting it has the same colors as an Indian flag.

“Right,” I said. “And if you don’t take me to this parade next year, I’m going anyway.”

“Promise I will,” he said. “I just didn’t realize we all need more Irish.” 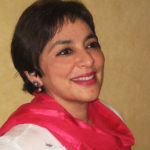 Shauna Singh Baldwin is a Canadian-American novelist of Indian descent. Her 2000 novel What the Body Remembers won the Commonwealth Writers’ Prize, and her 2004 novel The Tiger Claw was nominated for the Giller Prize. She lives in Milwaukee with her husband.