In 2018, a photo exhibit opened at the Paine Art Center in Oshkosh. “The Color-Brave Photo Project: Black and Brown Faces — A New Narrative,” was the culmination of years of work by community leaders to show the complexity and beauty of people of color in the Fox Valley.

The exhibit was an incredible success — it traveled to schools and churches across the state, and it was turned into a book.

At the center of the project was Tracey Robertson, a community leader who moved to Oshkosh from Chicago and started working for change.

She spoke with Jimmy Gutierrez about her experiences in Oshkosh and how this project came together in a recent episode of Human Powered, a podcast from our partners at Wisconsin Humanities.

In Chicago, Tracey Robertson took Blackness for granted because everybody else was Black. In 2014, she moved to Oshkosh and almost immediately threw herself into community work.

“Coming here and being one of the few forced me — required me — I’d say required me to be in this leadership position,” she said.

People would ask Robertson if she’d moved here because of the prison. 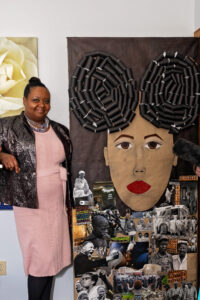 The conversation moderators, like Robertson, would show a video clip or a scene from a movie about race or a racialized incident. Moderators would then offer structure to unpack what they saw.

People were into it. But one night, a woman asked Robertson, “What’s next?”

“And I said, ‘I don’t know what you mean, this is what we’re doing,’” Robertson said.

The woman pushed back, saying, “No, what’s next?” Because what I’ve come to notice in the times I’ve been here is that you’re preaching to the choir, like the people who are showing up are the people who have a vested interest in this work, right? How do we get places like the police department, the county, the city, the stakeholders in this community? How do we get them at the table?” Robertson said.

Robertson started reaching out to community contacts, sharing her story, brainstorming possibilities. Eventually, she connected with Paul Van Aachen, a University of Wisconsin-Oshkosh professor. He suggested a photo exhibit.

“I just took that idea and kind of ran with it and said, ‘You know, it would be a great way to shift the narrative because people of color are as complex as any, any other group of people,” Robertson said.

“And the reasons that they move to a certain community and the reasons that they stay in a community are varied,” she continued. “Some people moved here for love. Some people moved here for career opportunities. And to put us in that little box. It just kept me up at night for many years. And so when Paul Van Auken sparked this idea, I was like, ‘Let’s do that.’”

The photos are studio portraits of people of color who live in the area. They are striking — like the best yearbook photos you’ve ever seen. Underneath each individual photo is a description about the person’s life and experience.

“We really wanted these stories to be meaningful and to stay true to each person’s voice and experience,” Robertson said. 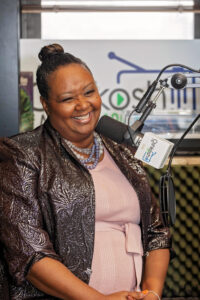 On April 20, 2018, “Color-Brave” debuted at The Paine Art Center and Gardens. Admission was free and the gallery was packed.

It was new for many of the people to see their faces and stories on display. Artistically, and with such care. It was also new for some of them to step inside this museum.

“We’ve got great pictures of little seven year old girls who’d never been to The Paine, looking at these beautiful portraits,” Robertson said.

She knew from the beginning these stories couldn’t stay housed in an art museum. The exhibit would go on to tour all across the Fox Valley. It traveled so much the photos were actually getting worn out. That’s where the idea came to turn it into a book.

“I have a six-year-old grandson who was born in Neenah, Wisconsin,” Robertson said. “And I love that he has that as a point of reference. He goes to school all day and rarely sees Black men who look like him, adults that look like him.”

“There are no teachers in his school that identify as a person of color and so that makes me really proud to know that there’s schools in our community that have this book,” she continued. “For some kids, that might be the only representation that they get.”

That story came to us from Human Powered, a new podcast from Love Wisconsin and Wisconsin Humanities. It’s a monthly series that is out now and a place where you can hear more about the work of Tracey Robertson. This story was narrated by “Human Powered” host Jimmy Gutierrez and produced by Craig Eley.