Boleslaw Kochanowski spends hours at his drafting table in his office above the blacksmith shop, creating designs for his metal sculptures. A pencil drawing of “To the Point,” a new public art sculpture unveiled this summer in Stevens Point, sits on the floor by the desk.

Getting the details right in drafting matters. The drawings, the modeling, the planning all matter. But it’s at the forge where his metalwork becomes art.

“Forging is where the art happens,” Boleslaw said. “If you can’t interpret it at the forge, it’s nothing.”

The forge in his shop is heated with coke — purified coal he buys by the ton in Gary, Indiana. It superheats the iron until the end is red-hot and malleable. For some tasks, Boleslaw or one of his sons use a massive power hammer to flatten and shape the metal. Then they finish the pieces by hand with a hammer and an anvil.

In the end, the heat and the hammering transform the raw piece of iron.

“It becomes organic, it has structure, it has sinuous shapes, musculature,” Boleslaw said. “That’s what makes it really special.” 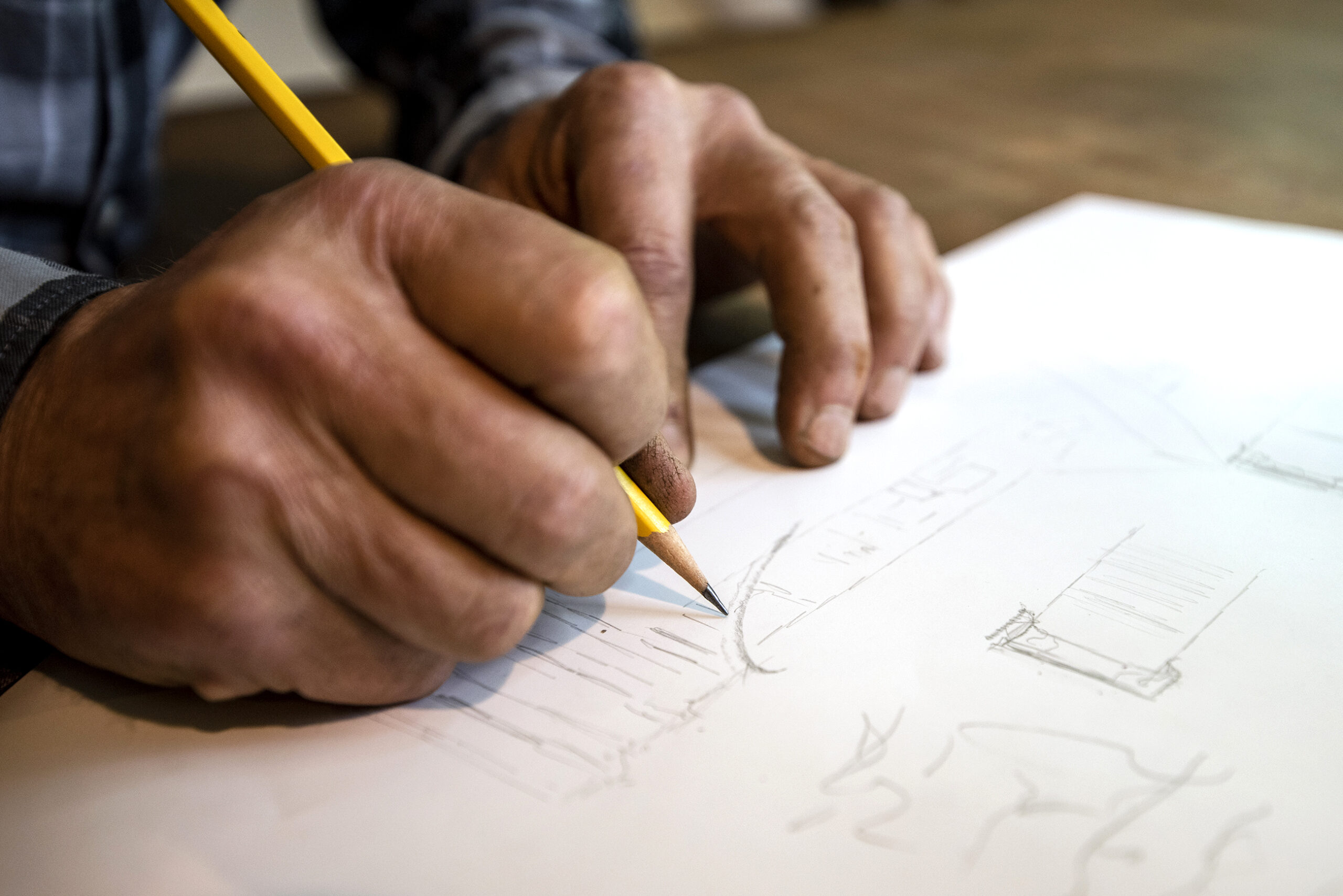 A drawing of a sculpture displayed in Stevens Point, Wis., is hung on the wall of Tuesday, June 29, 2021, in Junction City, Wis. Angela Major/WPR

Boleslaw has been making metal art for nearly 40 years. Today, he works with three of his sons in the shop behind the 100-year-old farmhouse where he lives with his wife in rural Portage County. Between the house and the shop is the sandbox where the kids used to play; now sometimes Boleslaw’s grandchildren play there.

But at 68, he said he feels like he’s just hitting his stride. In addition to his sculpture “To the Point,” this year he created one of the most personally meaningful sculptures of his career. Called “For Your Freedom and Ours,” it shows two eagles perched on twin spires — a Polish white eagle and an American bald eagle. The piece symbolizes the friendship and connection between Poland and the United States.

At 10 a.m. Saturday, it will get a formal dedication from Stevens Point’s Polish heritage society at Pfiffner Pioneer Park in Stevens Point. 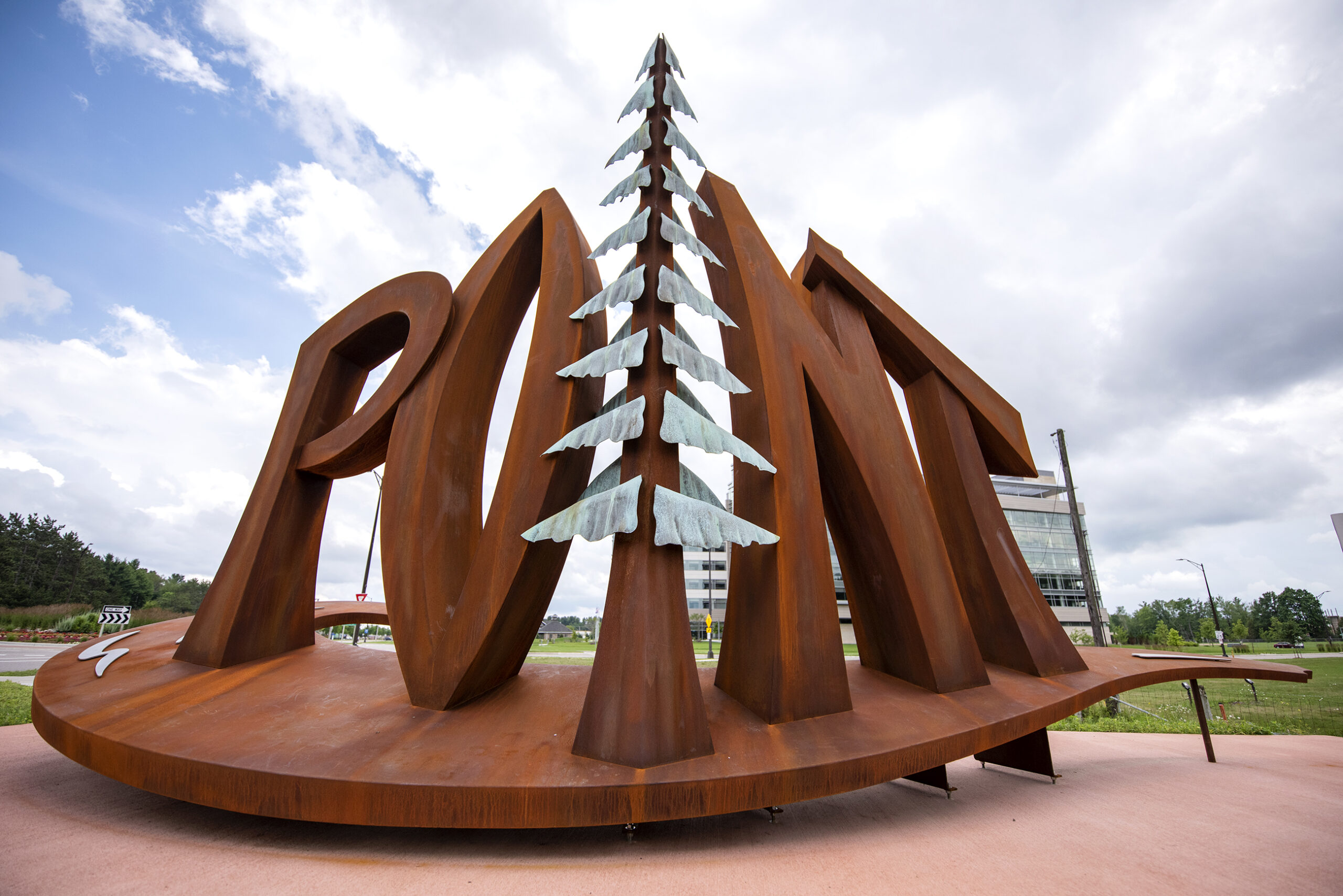 A sculpture created by Boleslaw Kochanowski is on display near a round about Tuesday, June 29, 2021, in Stevens Point, Wis. Angela Major/WPR

A Family With Blacksmithing In Their Blood

Boleslaw is a first-generation Polish-American, and he feels a deep connection to his ancestors’ home country. His father apprenticed as a blacksmith in Boleslaw’s great-uncle’s shop in Zamość, a small city in southeastern Poland, near the border with Ukraine.

When World War II came, he was rounded up by the Nazis and forced to work for the regime. After the war, Boleslaw’s mother and father immigrated to America. First, to Chicago — which, according to Polish people is the largest Polish city outside of Warsaw — and later to Milwaukee.

That family history is part of what makes the new sculpture so meaningful to him. On an afternoon in late June, Boleslaw invited me to visit the shop and see him working on “For Your Freedom and Ours.” After a lunch of golabki — a meatloaf-stuffed cabbage — and rye bread, Boleslaw and his sons talked about their work, working together as a family and making art.

“I have blacksmithing in my blood,” said Valerius Kochanowski, Boleslaw’s youngest son. “When I was 9, 10 years old, I’d fall asleep reading blacksmith books.” 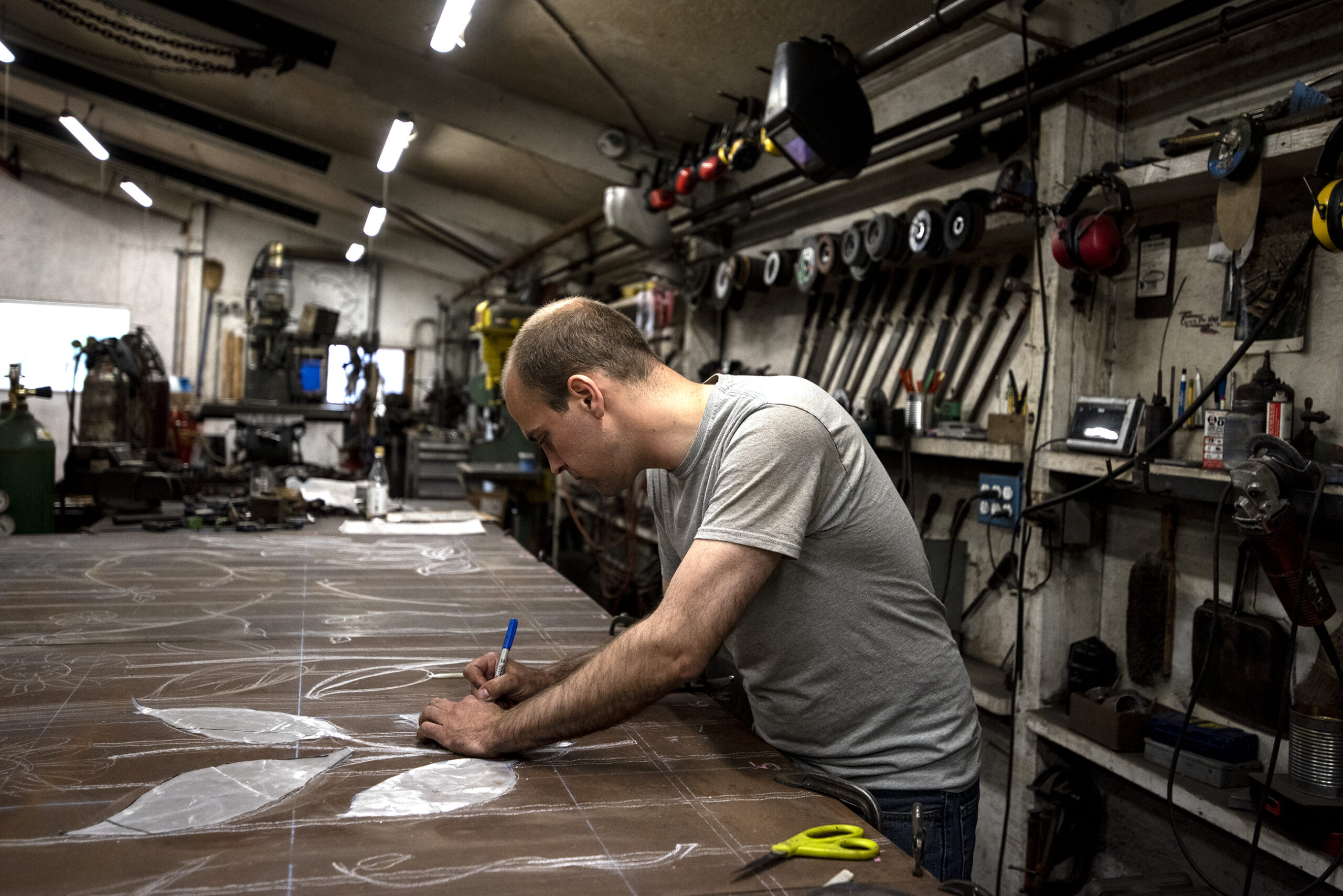 The Kochanowski’s always have multiple projects going in the shop; besides sculptures, they make decorative railings, doors, gates and fireplace screens. They share duties in the shop, but they each have their own specializations.

Vincent Kochanowski has a knack for mechanical work, and does much of the layout for the projects. August Kochanowski has a fine arts degree from the University of Wisconsin-Stevens Point — his panther sculpture crouches outside the Stevens Point Area High School. He does a lot of the hand-forging. Valerius does designs and also forging. (A fourth brother, Bill, doesn’t work at the shop, and Boleslaw’s two daughters live in Minnesota.)

“It takes days and sometimes weeks to complete a project,” Boleslaw said. For example, the vertical pickets of a deck’s railings are hand-forged with dozens of design elements embedded in, like sunflowers, birds and patterns.

Within that work, they find self-expression.

“As blacksmiths, we’re looking at those aspects that are unique to the metal,” August said. “Say I’m splitting a bar of metal. It’s naturally going to swell on the sides. I’m going to let that show.”

“If I’m drawing out a piece of metal, I’ll leave the hammer blows,” he continued. “And it’s just your individual mark … The iron becomes a vehicle to express our ideas through.” 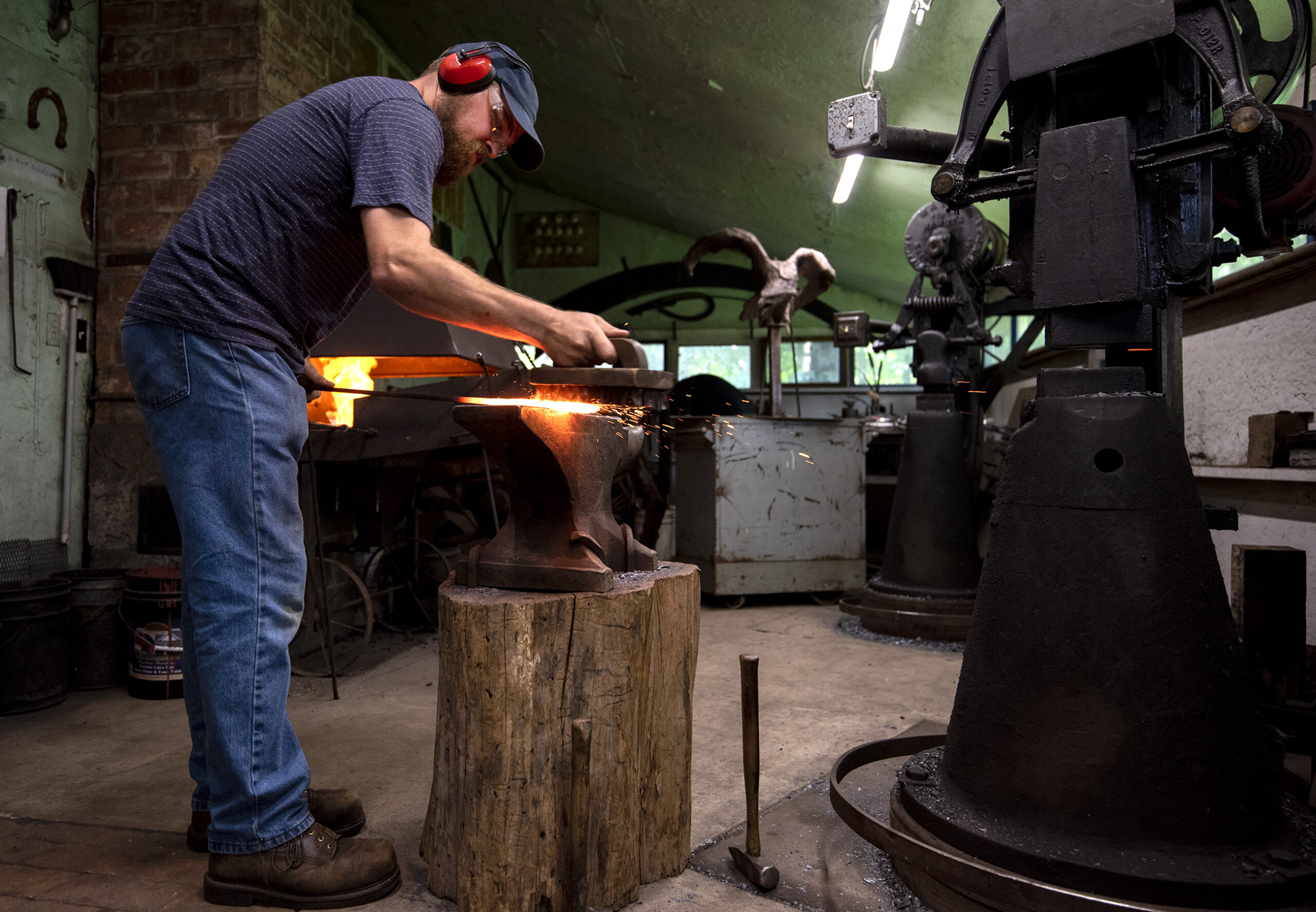 That afternoon, a surprise visitor dropped by the shop. Piotr Semeniuk, vice consul in Chicago’s Polish consulate, arrived to see progress on the piece, along with a Polish-born priest whose parish is in Wisconsin Rapids. Boleslaw, beaming, takes a picture with them.

It’s a busy time for Boleslaw. A few weeks later, the Chicago-based Polvision TV, a Polish-language station for expats, spent time with him in Stevens Point for a feature on, “For Your Freedom and Ours.” Boleslaw was nominated for a creative arts prize from the Polish American Historical Association. And before his latest sculpture was finished, he received word that he’d been selected to create a new piece of public art to be placed in downtown Waupaca.

Some of Boleslaw’s earliest memories are of his father, who worked as a blacksmith for the Chicago Transit Authority, forging metal parts for train cars.

“I knew he worked with metal,” Boleslaw said. “The smells of metal were on his clothes. I remember those smells. … That was inspirational to me.”

Boleslaw keeps some of the metal pieces his father made. He was a master of metalwork, he said.

When Boleslaw was a young man, he worked in structural steel, making the bones of buildings. But that was “basically anonymous work,” he said. “I wanted to do work that was not anonymous.”

It was in the early 1980s that he started to create decorative metal railings and to practice forging metal into art. Part of the appeal, he said, is the knowledge that the work he makes will last — perhaps for hundreds of years.

“When I was young, I couldn’t believe that cars rusted out like they do,” he said. “I really liked that locomotives were made and designed to go a million miles, because they were built right. I really have the attitude that my work is time-transcending, that it will be around a very long time.” 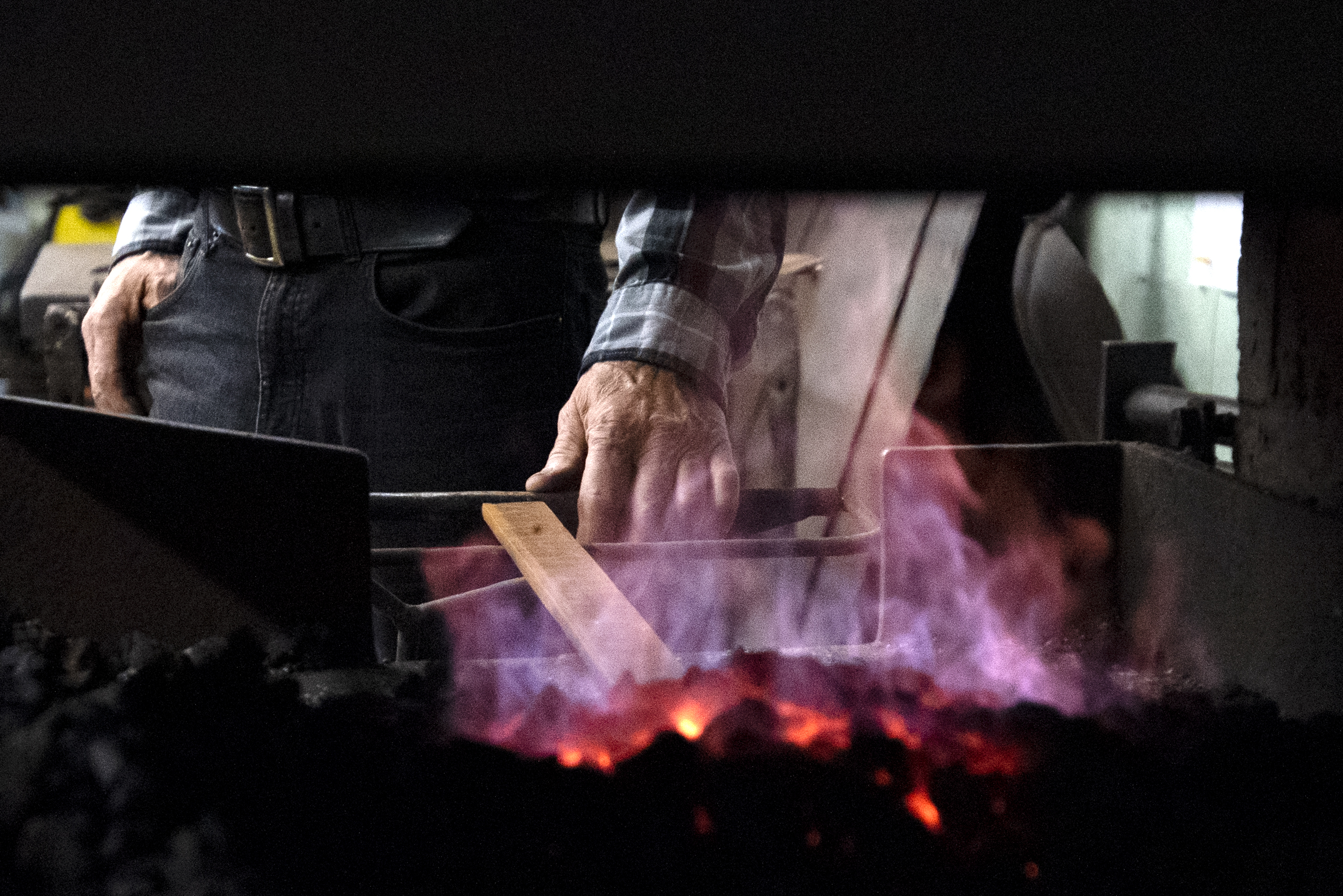 Boleslaw Kochanowski rests his hand on a tool before using it to create a sculpture Tuesday, June 29, 2021, in Junction City, Wis. Angela Major/WPR