(Left to right) Chris Hardie, Robert Hardie and Ross Hardie in 2010 on the Hardie family farm. (Courtesy of Chris Hardie)

Every year, Chris Hardie and his father sat together in the cold November woods on opening day of the gun deer hunting season. When his father’s health began to decline, it was still important for him to carry on the tradition. Hardie tells the story of the last hunting season he shared with his father, Robert Hardie, an expert hunter, who passed away in 2020.

Dad sipped coffee poured from his dented thermos as we watched a large gray squirrel scamper up a nearby tree.

We were sitting in a deer stand overlooking two fields. It was late morning, November 23, 2019 — the opening day of the Wisconsin gun deer hunting season. It was the 70th season Dad was participating in the annual hunt. We knew it was going to be his last.

Dad’s mobility and mental alertness had been declining for several years. The previous year he sat with me in my hunting stand for a few hours, and had difficulty climbing the hill. We were concerned about his safety. 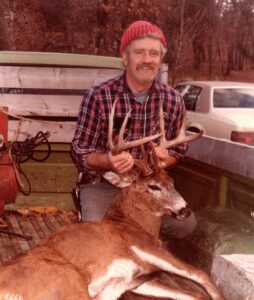 Robert Hardie shot this buck that field dressed at 200 pounds in 1983 on the family farm. (Courtesy of Chris Hardie)

Dad was an expert hunter. He knew the farm like the back of his hand. He never built a deer stand, but always sat in the same valley where deer frequently crossed. As the landscape changed, he would move his spot. But he always got a deer and it was usually the biggest buck taken that year from the farm. Like in 1983 when he shot an 8-point buck with a 21-inch spread that field dressed 200 pounds.

Over the past four or five years, Dad hasn’t gotten a deer. He never even took a shot. But it was still important for him to be in the woods — especially on opening day.

When Dad announced that he was going to hunt, my son Ross and I built a deer stand that was easily accessible from a field road. It wasn’t an ideal location, but over the years it has been a spot where deer have been taken.

We didn’t want him hunting alone, so we agreed to take turns. Ross started the morning by driving Dad to the stand and sitting with him for the first few hours. I came over in the late morning.

“What kind of tree is that?” Dad asked, pointing to a nearby gnarly bur oak. Dad once did a 4-H project where he created a display of all the different trees that were found on the farm. He knew trees.

“Oh sure,” he nodded in agreement.

The fields we overlooked were cleared by my great grandfather. Dad had told me the story many times. I wanted to hear it again.

“Weren’t these fields cleared by Grandpa Ray?” I asked.

“Yes they were,” he said. “They used a stump puller and dragged the stumps out with a stone boat. Can you imagine how hard that had to be?”

For a few moments it was like the old days. A father and son sitting together in the cold November woods, sharing a bond that transcends simply pulling the trigger of a gun.

Like the second day of the season in 1978, when Dad insisted that I hunt from his stand and I shot my first buck. I was just finishing the field dressing when Dad walked down the hill.

“You got one,” he said in his matter-of-fact style.

“It’s not that big,” I replied, mentally comparing the single antlers to the 8-pointer that he had shot the previous morning.

A load was lifted from my shoulders. I was no longer the buck fever kid who couldn’t shoot. As I stood there with my father just less than a month removed from my 15th birthday, I felt like a man.

It wasn’t the thrill of the kill, but the sense that I belonged. So many memories. So many stories. Dad fell silent.

“What kind of tree is that?” he asked, pointing to the same tree that we discussed 20 minutes ago.

“I think it’s a bur oak, Dad,” I said, turning my face away to wipe my moistening eyes.

A little while later Dad said he wanted to watch the Wisconsin Badgers football game. I gave him a ride in the truck and he settled into his easy chair. Dad’s last hunting season was over.

He always said that when it was his time to go, he wanted it to be in the woods under his favorite tree. He didn’t exactly get his wish, but he did die at home.

My 46th hunting season this year will be sad because my hunting partner and mentor is gone. The woods will seem empty.

But Dad will be there nevertheless. Because his memories and stories remain.

Chris Hardie and his wife, Sherry, raise sheep and cattle on his great-grandparents’ Jackson County farm. Nominated for a Pulitzer Prize in 2001, he is a former member of the Wisconsin Freedom of Information Council and past president of the Wisconsin Newspaper Association.