Wisconsin Life host Angela Fitzgerald spends the day at Madison’s Food Enterprise and Economic Development (FEED) Kitchens.  The organization provides commercial kitchen space for entrepreneurs and food enthusiasts to rent.  Fitzgerald gets a chance to meet some of the food cart vendors who rely upon the shared space.

Fitzgerald also shares a new collection of stories from the Wisconsin Life team, including a profile of a woman with a sweet connection to FEED Kitchens.  Monica O’Connell had a successful but stressful career.  After a move to Fort Atkinson, O’Connell discovered that baking relieved her stress.  And one day, she realized she liked baking more than her current job and made a big life change.

Next up, we head to Kewaskum, where Dan Lococo participates in what could be described as the ultimate version of a “trust exercise.”  Lococo is a member of a downhill skiing program for the visually impaired.  Along with P.J. Smith, who works as a sighted guide, the two men make their way down the slopes.  Lococo follows the vocal directions of Smith to make his own turns down to the base of the mountain.

Then, we meet an Eau Claire man whose life has always revolved around music.  Earl Holzman met his wife while folk dancing in the early 1980’s. Together, they raised their son to be a fiddle player. So it’s only fitting that Holzman would become a luthier, or person who builds stringed instruments. He built a family business around the nyckelharpa, a Swedish traditional folk instrument that is fairly uncommon in the United States.

Finally, a new story from Wisconsin Life’s animation series. In this animated version of the WL comic strip Something About a Flower, a young girl discovers a family tradition that becomes food for the soul in this tale titled “The Fortune We Share.” 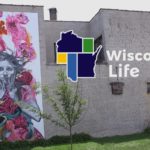