From The World’s Largest Six-Pack To The Hodag: A Tour Of Wisconsin’s Roadside Attractions

Author Eric Dregni has been a keen observer of roadside attractions for years. He recently wrote the book “The Impossible Road Trip” that chronicles the most famous stops across the United States. And, believe it or not, Wisconsin is home to some of the quirkiest. From La Crosse to the Dells and Hayward, Dregni takes you on a tour of the best roadside attractions across the state. 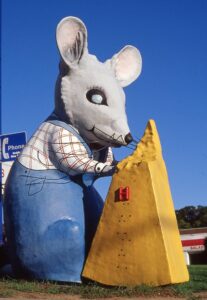 Being born in Wisconsin, I just assumed these gigantic sculptures of everyday objects were destined to take their rightful place along the roadside to lure in visitors. Then I lived in Italy with all the supposedly “tasteful” statues and architecture. Later, when Italian friends came to visit me in the Midwest, I tried to show off our impressive architecture — the old churches, the Capitol. They’d respond, “You know these are all just imitations of Italian buildings. You have seen St. Peter’s in Rome, no?” 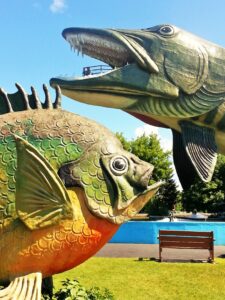 Muskie and sunfish sculpture in Hayward. (Photo by Eric Dregni)

With this in mind, I resolved to show my own kids what is “truly American.” We set out on the Wisconsin byways. We saw talking cows, rusty dinosaur statues and too many mice eating cheese to count. A giant Bucky Badger in Birnamwood is now half buried next to signs promising “Hot Girls, Cold Beer.” We got lost in the labyrinth of House on the Rock and discovered Dr. Evermor, who gave us a tour of his Forevertron, a Jules Verneesque steampunk rocket ship, before he blasted off into the heavens.

A trip into the kitsch world of Wisconsin Dells never disappoints, except when we discovered that Tommy Bartlett’s Robot World was brought into the 21st century with no more cheesy 1970s evil robot slaves, and Xanadu the Foam House of Tomorrow had been unceremoniously discarded. Perhaps all that hardened foam from Xanadu was repurposed as the new giant Roman Colosseum next to the upside down White House. Why just look at ancient Greek statues in sterile museums when you can drive a go-kart through the belly of a six-story tall Trojan Horse? 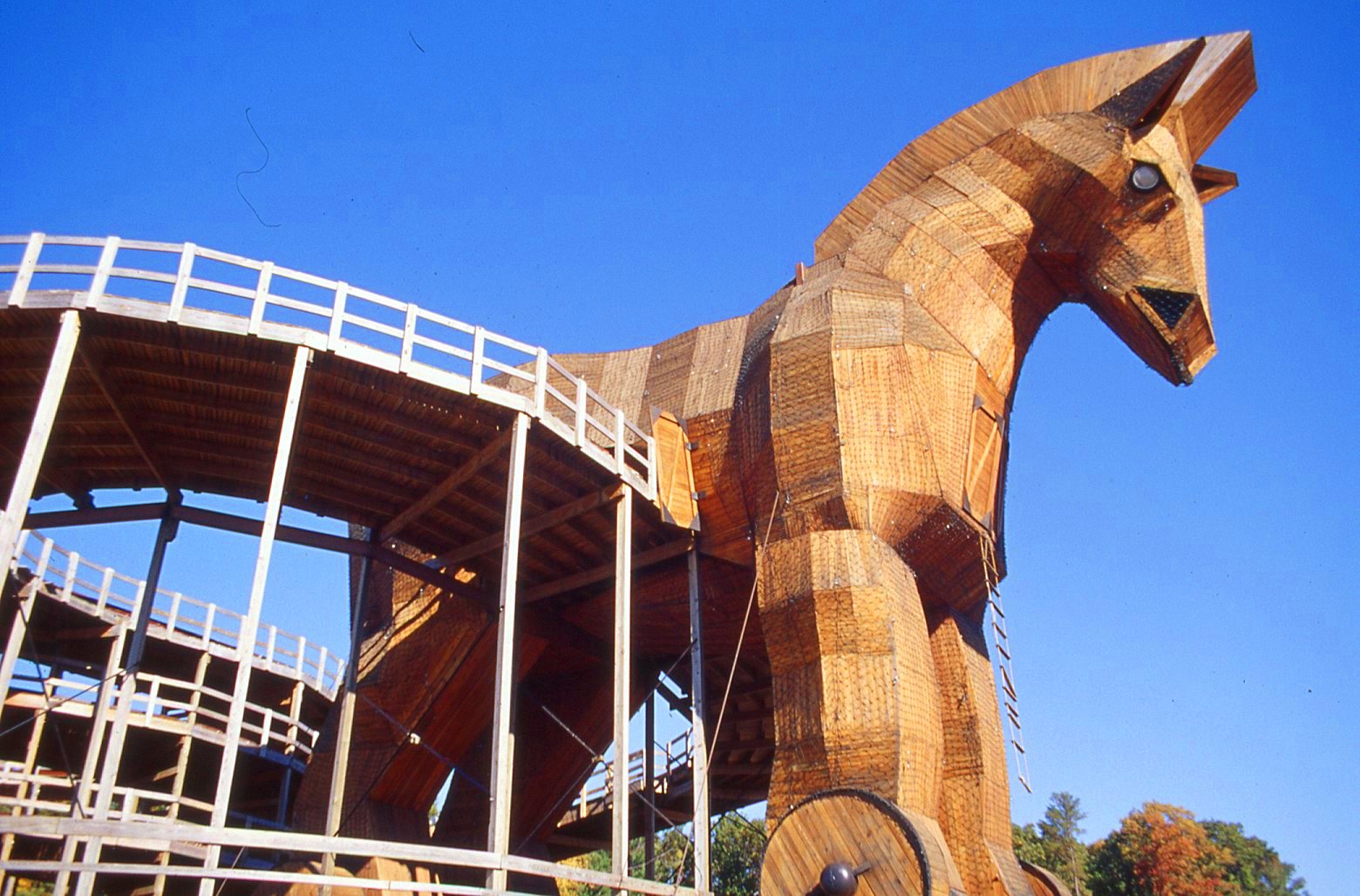 The best of Wisconsin’s roadside attractions come from a burning desire by an obsessed individual to create a giant monument to prove, “I Was Here.” Even better are those that are the result of a practical joke, such as Rhinelander’s Hodag, an elaborate hoax based on the capture of a mythical monster with photos that ran on the front page of newspapers across the country. 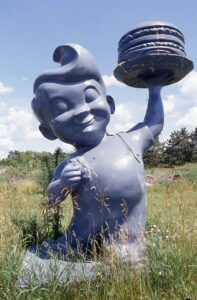 This is not normal behavior — thank God — and Wisconsin is full of it! Midwestern tourist bureaus drool over the idea of a lucrative roadside attraction, but the best sites are seldom devised by a committee in a boardroom. The creators are artistic visionaries scorned as kooks and crazies, but are the very ones who give our towns character. Why raise statues to some self-important governor when you can create your own idol, like the 143-foot-long muskie in Hayward. Wouldn’t you rather see that than some dusty old Roman statue that’s missing its arms?

Many of these fiberglass artifacts were born in Sparta, Wisconsin at the F.A.S.T. company. They made Hayward’s muskie, a 55-foot half-man, half pea pod Jolly Green Giant in Minnesota, and a 38-foot-tall holstein in North Dakota that is visible for five miles. We visited their graveyard of discarded statues and seriously considered buying an enormous Big Boy for our front yard.

But what would the neighbors say?

Instead, we realized we could never compete with the original grandeur of La Crosse’s monument to beer.