Many of us have an affinity for certain trees. For Robert Root, it’s an oak that welcomed him to a section of the Ice Age Trail near his home.

Only after the oak had fallen did I realize how much it had cheered me whenever I saw it. It stood at the start of a secluded segment of the Ice Age Trail near Hartland. Barely into the forest, hikers had to dance around this huge bur oak, its limbs thrown wide as if in welcome. Another oak was in shadows just beyond it and, deeper in the woods, others were camouflaged by undergrowth and younger trees, but that first oak rooted itself in my memory. When my wife and I became stewards of that trail section, I looked forward to seeing that welcome oak. It stood apart from the thick forest that surrounded it, as if announcing that we were stepping into a special place—that we were stepping out of the preoccupations of a bustling world into a serene setting where, like the trees themselves, we had to think only about simply being.

That tree activated an unsuspected affinity with bur oaks, and I enjoyed finding them all around Wisconsin. Bur oaks are solid, tall, expansive; their limbs stretch out in every direction. They anchor open spaces, where they easily survive grass fires sweeping across their encircling savannas. Once settlement impeded those fires, forest growth began to hem them in. They were most conspicuous on an open savanna but harder to notice in forests along the Ice Age Trail. Whenever I spotted one nearly hidden in the woods, it would stop me in my tracks.

The welcome oak, it turns out, for all its breadth and height, had long been hollow. Still, the wind that convinced it to keel over must have been powerful. It wasn’t uprooted, flattened on the ground, but bent at its ankles, as if it had tripped while walking in the woods. It lay across the trail, its long limbs outstretched like something trying to catch itself as it fell. The upper branches now sprawled close to the ground, held up partly by lower trees and bushes. If you didn’t know the trail once led around it, you might find it hard to locate the trailhead when you entered the forest.

Ice Age Trail volunteers sawed off some limbs and rerouted the trail around it. The welcome oak maintained its plank position, refusing to fully hit the ground. The last time I saw it, it had rolled across the rerouted trail, but it was still high enough for me to scootch under. The crew will need to come back, trim it more, but let it take its own good time to collapse entirely. It will take awhile.

When I visit it now, though fallen, I pause to consider its longevity. I remember that before this forest and before the agriculture and industry and affluent suburb around it, this oak rose nearly alone in open space. It no longer welcomes me here, but I still can imagine the oak towering above the grasses in prairie sun and savanna wind. I can imagine it spreading its limbs wide before the vibrant spirit of the land,  as if in welcome. 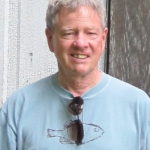 Robert Root is the author the forthcoming Walking Home Ground: Time, Terrain, Transition and other books. His essays have been listed in the Best American Essays series and given the Council of Wisconsin Writers Award for Short Nonfiction. He teaches in the Ashland University MFA Program and at the Loft...